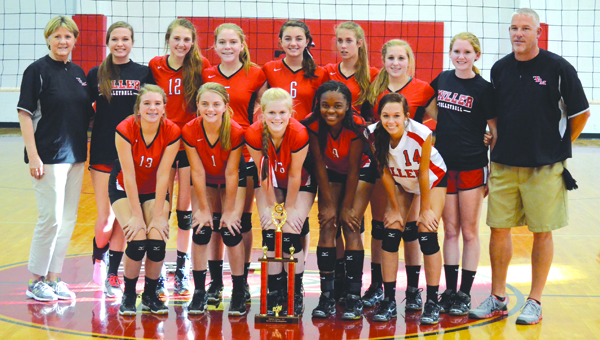 For the first time since 2005, T.R. Miller’s Lady Tiger volleyball team captured the area tournament championship. TRM, who went 3-0 in the regular season, hosted Opp and Hillcrest Monday at home for the class 3A area 2 tournament.
After Opp defeated Hillcrest 3-1 in the semifinals, TRM defeated the Lady Bobcats 3-0 for the area crown. TRM won 25-20, 25-21, and 25-11 to get the championship.
“It has been a while,” TRM head coach Greg White said. “I am very proud of the girls. This was our goal before we started the season and we did everything right to put ourselves in this position to win it. We played well tonight although it was a little rough at first. As time went on, we had a net advantage, and as the night went on we tried to use that and I think we did. Opp got after it, but I think our net advantage helped us out.”
In the game against Opp Monday, Amelia Peach led in set one with five service points and two kills.
In set two, Peach led with three kills and four service points. In set three, Caitlyn Smith had six service points to lead while Peach had five to end the game.
With the area tournament championship win, TRM improved to 19-5 overall and will now advance to the super regionals.
At the super regionals, on Fri. Oct. 24, games will be played at the Multiplex at the Cramton Bowl in Montgomery.
Class 3A, area 2 will meet up with area 8. The area 8 winner will play the area 2 runner-up (Opp) at 3 p.m. while the area 2 winner (TRM) will meet the area 8 runner-up at 5:30 p.m. The area 8 area tournament was to be played at Oakman and consisted of Fultondale and Midfield.
White said his team has won 19 games and has a chance to win a few more at regionals.
“I am excited about what lies ahead for us,” White said. “We need to have a good week of practice. If we don’t have it by now, we just don’t have it. We need to work on us and work on focusing and getting better at the little things. We just need to give ourselves a chance against either Oakman or Fultondale. From this point on, its one game at a time. If you lose, you go home. We just need to make the most of this opportunity.”
For W.S. Neal, the Lady Eagles went 0-3 in class 4A, area 1 play, and took the No. 3 seed. They were to play Satsuma at 4:30 p.m. on Tuesday, Oct. 21. The winner played UMS-Wright at 6 p.m. for the area championship. See next week’s edition for a complete recap of WSN’s tourney.
The area winner and the area runner-up will both advance to the regional tournament.