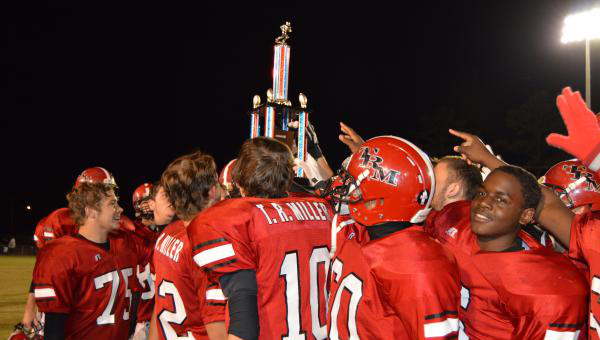 Down 17-16 in overtime, T.R. Miller’s Chardian Johnson scored a two-point conversion for the Tigers to give TRM an 18-17 win over W.S. Neal in the 2014 version of the Battle of Murder Creek.
“What a great game,” TRM head coach Jamie Riggs said. “It was a fantastic game. WSN played really hard is a really good team.”
As for the two-point conversion play for the win in OT, Riggs said he liked what he saw from WSN’s defense when he sent his offense on the field and make the Eagles call a timeout.
“It was a good play,” Riggs said. “Jones Manning couldn’t run, so Chardian was in there and is really fast. I just thought we had a shot when we called time out.”
WSN head coach Doug Hoehn said both teams played really hard.
“TRM gave us the ball on turnovers and then we gave them two of our own,” Hoehn said. “It was a great game. I thought both teams played really hard.”
WSN led TRM 7-0 after one quarter of play and 7-0 at the half.
In the third quarter, TRM outscored the Eagles 10-3 to tie the game up at 10-all. After neither team scored in the fourth quarter, the game went into overtime. It was the first overtime since WSN won 14-8 over TRM in 2007 in East Brewton.
In overtime, WSN got the ball first and Malcolm Hawthorne scored on a 4-yard run and Trey Taylor added the PAT to give the Eagles a 17-10 lead.
On TRM’s first play in overtime, McHenry Coleman scored on a 10-yard run. Johnson added the two-point conversion for the win by one.
Dakota Graves got WSN on the board first in the first quarter as he scored on a TRM fumbled punt that was recovered in the end zone with 6:54 left in the first quarter. Taylor added the PAT.
Taylor put WSN up 10-0 with 10:01 left in the third quarter as he kicked a 24-yard field goal.
Ahmaud Taylor scored TRM’s first touchdown as he ran in from 1-yard out with 6:55 left in the quarter. Hunter Brittain added the PAT and later added a 22-yard field goal with 1:16 left in the quarter to tie the game at 10-all.
TRM had four fumbles in the game and lost all four while WSN had two and lost both.
The Tigers had 11 first downs in the win with four coming in the first half and seven in the second. WSN had five first downs with four coming in the first half and one in the second.
TRM had 134 total yards of offense with 131 coming on the ground on 39 carries. WSN had 125 yards of total offense with 120 coming on the ground on 41 carries.
The two teams combined for only 137 total yards in the first half of play.
With the win, T.R. Miller improved to 9-1 overall this season while WSN saw their five-game winning streak end and fell to 6-3 overall.
Both teams will play in the playoffs next week as TRM will host Greensboro and WSN will travel to Northside.
The win for TRM improved the Tigers to 3-0 over WSN on Halloween games.
See Wednesday’s paper for a complete game recap of Friday’s game.