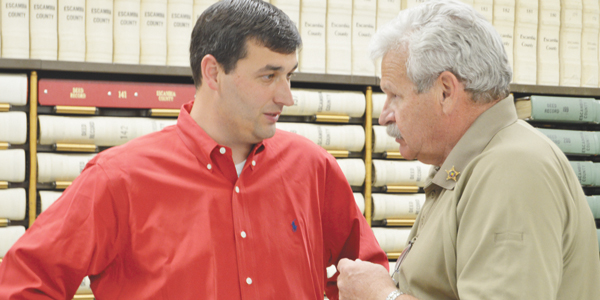 Voters re-elected Grover Smith as Escambia County sheriff, while after a very close race, put Tim Pettis in as the county’s new tax assessor.
Smith, a Democrat, was elected to his fourth term as sheriff, won the popular vote with 5,304 ballots cast to the 3,807 ballots cast for his Republican opponent, Heath Jackson. Smith ended the night with 58.2 percent of the vote to Jackson’s 41.8 percent.
Smith said he appreciated every vote cast in Tuesday’s general election.
“And it doesn’t matter if it was for me or for (Jackson),” Smith said. “I am very humbled. I will do my best to be a sheriff to everyone and to be the best sheriff I know ho. I also thank everyone who encouraged me. This is my home, and I am proud to represent it.”
Jackson also gave his thanks to supporters.
“I thank them for putting their time, their name and their friendship on the line to support my campaign,” he said. “I came up short, but we hope at the end of the day that we addressed the issues that needed facing and we’re hopeful a light was shone on things and the community will benefit from the election process.”
In the county tax assessor’s race, Tim Pettis of Brewton narrowly defeated Todd White by a nearly 3 percent margin. Pettis ended the night with 51.28 percent of the vote, or 4,557 ballots, to White’s 48.64 percent, or 4,323 ballots. There were seven write-in ballots cast in the race.
“I am happy, but it really hasn’t sunk in yet,” Pettis said. “I would like to thank my wife for the help and support and all who voted for me. I did not win this election by myself. All the people who helped me did.
“I told so many people throughout this process, ‘thank you,’ and that’s what I want to say today. All the kind words mean a lot,” he said.