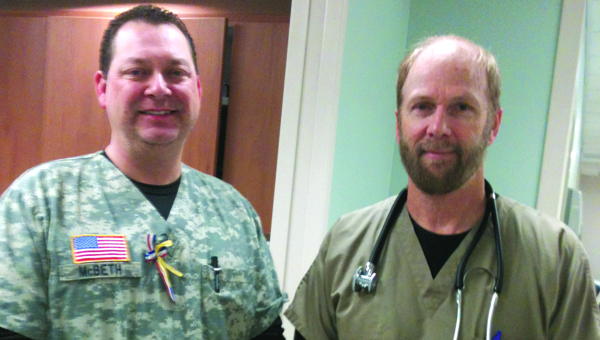 Almost everyone has a doctor they can rely on for their aches and pains during the day, but there are those who use the emergency room at the hospital when they are sick.
When a patient walks into the D.W. McMillan E.R. they will probably see one of two doctors; either Dr. McBeth or Dr. Nelson. Although they are aided by several doctors from the Brewton Medical Center, the hospital is the only place these two doctors practice here in Brewton.
Veteran’s Day was observed on Tues., Nov. 11, and both Dr. Nelson and Dr. McBeth come from a military background.
Dr. Scott Nelson, who is the Emergency Room director at D.W. McMIllan Hospital, grew up in southern California
“I was a typical southern California boy growing up,” Nelson said. “ My father was a fighter pilot with the Army Air Force and my mom was an OB/GYN from Scotland. When I was growing up, I spent a lot of time surfing and was a life guard at the beach.”
He attended college in San Diego and went to medical school at the University of California at Irvine. He was one of five boys, and his was an active lifestyle. He continues to be interested in living an active and healthy lifestyle. He and his wife are the parents of four girls and one boy who have been the backbone of the track team at T.R. Miller High School for the last few years.
How does a doctor from a metropolitan area of California wind up in small town Brewton? It seems that the medical profession recruits doctors all the time and apparently that is what brought the Nelsons to Brewton.
“I was working in LaGuna Niguel, Calif., and was recruited to come to Brewton,” Nelson said. “I chose to accept the offer and make the move. Brewton has it’s problems, but crime and drugs are not nearly as bad as they are in big cities. It’s so much better for the children to grow up in a small town.
“Working in an emergency room is so gratifying,” he added. “It is so rewarding to know that I can help someone when they are really in need. It can be very stressful at times, but I enjoy what I am doing.”
Nelson said that working in the emergency room has changed over the years.
“Medicine is a lot different these days,” said Nelson. “I am glad to be living here in small town Brewton. I am glad I came here 14 years ago and hope to be here for a long time.”
Dr. Michael “John” McBeth is still active military. He was born and raised in Sulphur, Okla. He dropped out of school and joined the U.S. Air Force at the age of 18. His first job was driving a bus, but he wanted something more, he said.
“I didn’t have the education to do much of anything so I got the job of driving a bus,” he said. “I knew that I didn’t want to do that for the rest of my life.”
McBeth entered the military just in time to be sent to the Middle East in 1990 and 1991 to participate in Operation Desert Shield/Storm. After returning to Oklahoma, he continued to be a part of the Oklahoma Air National Guard from 1992 to 1996.
Although he dropped out of school, he worked for and earned his GED. He attended East Central University in Ada, Okla., and attended medical school at Uniformed Services University of the Health Sciences (USUAS) in Bethesda, Maryland, from 1996 to 2000. He did his residency in Family Medicine at Eglin Air Force Base until 2003. Since that time he has been working with Special Operations with the US Air Force traveling in Europe, Africa and the Middle East.
McBeth lives in Milton, Fla., and has worked in hospitals in the south Alabama towns of Grove Hill, Opp, Elba and several others.
“I like working in small town hospitals,” he said. “Brewton has been my favorite because it is closer to where I live. It is also a very well equipped and staffed to be a small town. I like working in the ER because something is always going on. You never know what will walk in the door next. I have been coming to Brewton since 2005 and there are some very good people here to work with. The nurses are the best, and they are the backbone of the ER.”
McBeth is married and has five kids, four grandchildren and another due in July. Three of his sons are also in the military. He and his family live in Milton and he continues to work at his Air Force job at Ft. Walton Beach, Fla.
When he is not working at Fort Walton or filling in here in Brewton, he can be found riding his motorcycle. He said he and his wife enjoy taking trips together on the back of his motorcycle.