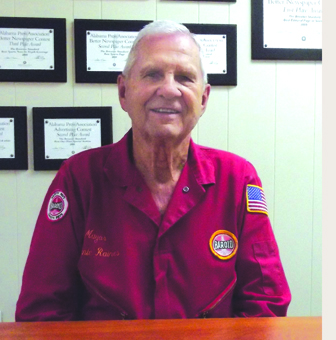 Bernie Raines has been a fixture around Brewton and East Brewton for more than 40 years.
The sight of him in his red coveralls is very familiar and most everyone who runs into him knows who he is.
“I started to wear these coveralls when I was working in the oil industry,” Raines said. “I got used to them and just kept wearing them even after I quit working at that job. I need to find where I can buy some new ones, but that’s not easy.”
These days Raines stays busy with his garden and his church activities. He cultivates a large garden making sure that his family and friends receive a share of what is in season.
He is a faithful member of East Brewton First United Methodist Church. He is a Sunday school teacher, teaching the same adult class that he took over in 1971. He is also a certified United Methodist lay speaker since 1965.
The other activity that takes a lot of his attention is his membership in Masonic Lodge 301. He became a Mason in 1955 and joined the organization at Lodge 301 when he moved to East Brewton in 1969. He and his wife, Edith, live in East Brewton and raised their three daughters and one son there. Edith is a retired school teacher at W.S. Neal Elementary School.
Raines was born at Lenox in 1934 and attended school for one day at Lenox Elementary School before the the family moved to Pensacola in 1940 when the dad got a good job at Pensacola with Hardaway Construction. The very next year his dad was caught up in the military when he was drafted into the army during World War II. While he was gone during the war, the family of three girls and two boys lived at Gull Point in Pensacola. When he returned he hoped to go back to the construction business, but instead he joined the Army Air Corps and the family moved once again, this time to Fort Walton, Fla..
Raines attended Fort Walton High School and after graduation, he enrolled and received a master’s degree at, what was then known as Troy State Teacher’s College. He was hired as a math and physics teacher and coach at Newton, Ala. Their first child, Shannon. was born at nearby Ozark and the family soon moved on to Mariana High School. After staying there for a year they moved to Geneva High School where he taught and coached for four years.
“After teaching and coaching I decided to become a principal,” Raines said. “I had my master’s degree so I didn’t have to go back to school to move into a principal’s position. My first job was at Sweetwater, but after four years I moved on to Bullock County High School for a year.”
It was while he was at Union Springs in Bullock County that the schools were integrated.
“I got a call from Harry Weaver about coming to Escambia County, and I came to W.S. Neal High School in 1969. I was principal for the next four years.”
It was at that time that Raines decided he wanted to make a complete change and took a job working in the oil field for the next 30 years.
In those years he worked off shore, in Peru and Africa for a variety of oil companies. He also ran for and was elected mayor of East Brewton in 1988.
“I enjoyed working for the people of East Brewton,” Raines said. “Now I am enjoying my church activities and my work with the Masonic Lodge. I have been a member since 1955 and have served as secretary, Most Worshipful Master and on the Committee on Work for the past 17 years.
He and his wife also spend time with the rest of their family. They have eight grandchildren and five great-grandchildren. Most of them live in the Brewton and East Brewton area.

Be safe this holiday season