‘Nanny’ gets into Christmas spirit 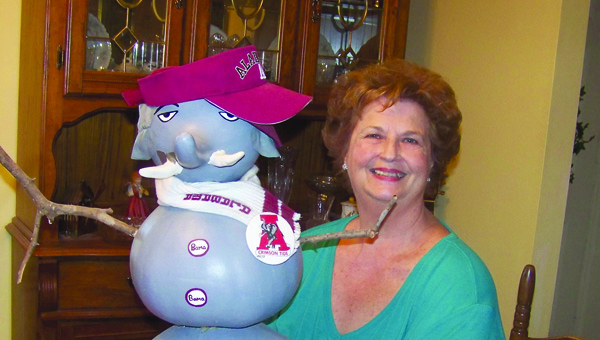 Christmas is just around the corner and organizations are gearing up with their special events. The Christmas parade is sure to be exciting this year as it will be the first one to be held at night.
Of course one of the annual events everyone looks forward to, is “The Nutcracker” performed by members of the Brewton Dance Studio.
Along with the dancers there are a variety of roles that have been taken by members of the community. One such role has been held for the past 24 years by Barbara Maddox, who portrays the “Nanny.”
“In the past 24 years I have played this part and even though I don’t move as fast as I used to, the part has been adapted to what I can do,” Maddox said. “One year I had knee surgery and couldn’t move too well and now I have to play my role a little different.
“This year the kids were dancing around me so I didn’t have to move so much. What I do on stage is not dancing. It’s more like running around. I don’t even try to pretend that I am a dancer.”
This year “The Nutcracker” was held Sunday at Jefferson Davis Community College. The cast was very large and many members of the community joined in the dancers to bring to life the story of Clara and the magic of this long-time Christmas favorite.
“ I remember that Ashlee Owens was Clara in my first performance and she is still part of the cast this year,” Maddox said.
Maddox has not limited herself just to “The Nutcracker.” She has always been a part of community activities and. along with her husband, Jimmy, remains active in St. Stephens Episcopal Church and whatever is going on there.
Although she is not a native of Brewton, she said she feels as if she has always lived here.
She was born in Greenville to Mr. and Mrs. Obed Monk, and grew up in the Brewton area. She attended the city schools and graduated from T.R. Miller High School. Right out of high school she married Jimmy Maddox, who grew up in the East Brewton area. He graduated from W.S. Neal High School and worked for years at Container Corporation. The two have been married for the past 53 years, have two children, Tina Wallace and David Maddox, and three grandchildren.
She has slowed down now, but almost everyone knows Barbara. She was a stay-at-home mom when her children were little, but when they started to school, she decided she would join the workforce. She started in radio.
Dennis Dunaway was married to her sister, Jan, and she began working at the radio station. She did commercials and worked in sales at the station for a number of years. She then went into sales at Fitz-Gerald Motors. For several years she worked in sales at The Brewton Standard and spent a lot of time over the years looking after her younger sister, Jan.
“Brewton has been good to us,” she said. “We have had a lot of joy and entertainment in our lives and it has been great to live here all these years. We love working in our community and being a part of St. Stephens Church.”