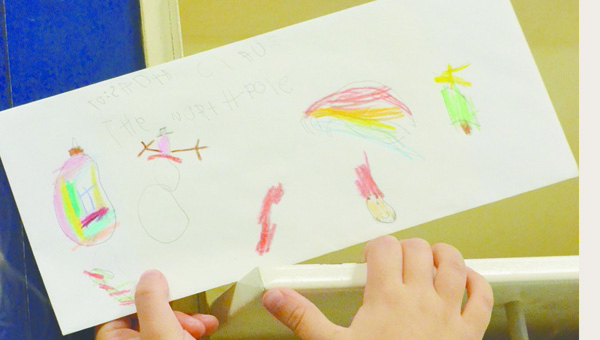 With Christmas being just a few weeks away, letters to Santa Claus are constantly being seen in the mail, and the post office in Brewton is no different.
Tracy Palmer, officer-in-charge (OIC)/postmaster of the Brewton post office, said her post office has seen several letters come through addressed to the man at the North Pole asking for various items on children’s wish lists this year.
“We have seen several coming through,” Palmer said. “We have a special return system set up for the kids who send in letters through the Post Office’s Operation Santa and Letters to Santa Program.”
Palmer said if kids send in letters through the Brewton Post Office addressed to Santa Clause or the North Pole, replies are sent back.
“There is no deadline as long as they get them to us before Christmas,” Palmer said. “We have special letters that our clerks sign and print out saying that it was received by Santa Claus.”
The Postal Service’s annual Operation Santa program, a campaign that has helped fulfill holiday wishes of children and their families for more than a century, is an annual letter-writing program for individuals, businesses and charitable organizations to respond to children’s letters addressed to Santa Claus, the North Pole and other seasonal characters. To mark the start of the letter adoption period, a ceremony was held today at New York City’s Operation Santa command center — the iconic James A. Farley building — with a special appearance by Santa Claus.
“We are delighted to once again kick off the holiday mailing season with the start of our annual Operation Santa program,” said William Schnaars, Postal Service district manager of New York. “What better way to celebrate the season than to help Santa and his elves read the thousands and thousands of letters we have on hand.”
“Operation Santa has made dreams come true for those in need for 102 years,” added Schnaars. “This is a time to celebrate how Postal Service employees, charitable organizations, businesses and others have made a difference in the lives of children coast to coast.”
The Postal Service’s Letters to Santa program is celebrating 102 years of helping make children’s holiday wishes come true.
Although USPS began receiving letters to Santa Claus more than 102 years ago, its involvement was made official in 1912 when Postmaster General Frank Hitchcock authorized postal employees and citizens to respond to the letters.
Today, the popular holiday program is known nationwide as Letters to Santa.
Thousands of volunteers work with Post Offices to respond to letters from children of all ages listing their holiday wishes.