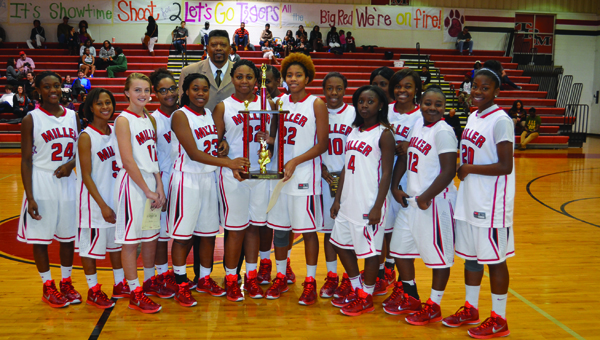 The T.R. Miller Lady Tigers captured their first Escambia County Tournament championship since 2009 while the Escambia County High School Blue Devils earned their seventh straight title Saturday at T.R. Miller High School in Brewton.
The Lady Tigers went 2-1 in their three games and downed Atmore’s Lady Blue Devils to force a three-way tie for the championship with Atmore and Flomaton.
With the tiebreaker being least points allowed, TRM won by allowing 95 points. Flomaton ended up in second place after allowing 116 points while Atmore took third after allowing 124 points. WSN went 0-3 in their tournament games.
In the boy’s tournament, Atmore went 3-0 to win the championship. TRM took second place with a 2-1 record followed by WSN at 1-2 and Flomaton at 0-3.
In Friday’s games, Atmore’s girls defeated Flomaton 56-50 while the boys won 73-35.
TRM’s girls took down WSN 48-12 while the boys won 73-58.
On Saturday, Flomaton’s girls defeated WSN 58-23 while the Eagle boys defeated Flomaton 75-51.
In the last two tournament games, TRM defeated Atmore 41-35 while Atmore’s boys won over TRM 61-40.
TRM’s girls improved to 5-4 overall after the tournament while the boys went to 4-2.
WSN’s girls fell to 2-7 overall while the boys went to 4-5.
TRM Lady Tigers head coach Ron Jackson said his team started slow against Flomaton, but played good defense the rest of the tournament.
“Flomaton has a really good team and have a lot of speed on their team,” Jackson said. “They went on to win that ballgame, but defensively, I think we have come a long way. We really went out and played tough defense against W.S. Neal and held them to 12 points. We then came out (Saturday against Atmore) and played tough and tenacious defense. We played smothering man-to-man and we trapped them. We really did put a lot of pressure on them and at the end they ran out of gas. We were glad to come out with a win. Atmore is a really good team. They shoot the ball very well and are disciplined and well-coached.”
So how does this tournament prepare the Lady Tigers the rest of the season?
“It can’t do anything but make us better,” Jackson said. “I think the girls are buying into the fact that if we play hard for 32 minutes that they can win some ball games.”
TRM boys head coach Juan Johnson said his team struggled in the championship game Saturday against Atmore.
“We just didn’t do a good job of playing defense and rebounding,” Johnson said. “We talk all time about doing the little things make big things happen. We just didn’t get it done tonight.”

ECHS girls 56, Flomaton 50
Atmore’s Nichole Johnson poured in 24 points to lead ECHS to a 56-50 win over Flomaton Friday.
Atmore led 17-14 after one quarter and outscored Flomaton 16-6 in the second quarter to grab a 33-20 lead at the half.
Flomaton rallied in third quarter with a 15-6 advantage to cut the lead to 39-35, but Atmore ended the game on a 17-15 run to get the win by six points.
Jade Adams added 10 points in the win for the Lady Blue Devils.

ECHS boys 73, Flomaton 35
Atmore’s boys took a commanding lead in the first quarter and at the half to cruise to a 38-point win over Flomaton.
The Blue Devils led Flomaton 15-2 after one quarter and 30-8 at the half. In the third quarter, the Blue Devils outscored Flomaton 23-14 to take a 53-22 lead into the fourth quarter. In the fourth, ECHS got 20 points to Flomaton’s 13 to get the 73-35 win.
Ten Blue Devils scored in the win with Marquis Brooks and Triston Knott both leading with 13 points each.

TRM Lady Tigers 48, WSN Lady Eagles 12
TRM’s defense propelled the Lady Tigers to a 48-12 win over WSN Friday night.
TRM led WSN 16-5 after one quarter and 35-11 at the half. A 10-0 run in the third quarter was followed by a 3-1 advantage in the fourth quarter to help aid in the 36-point win.
Mekiah Williams, the tournament’s most outstanding player, led the Lady Tigers with 16 points. Steely Ruzic added 11 in the win.
For WSN, KeKe Floyd led with seven points.

TRM varsity boys 73, WSN 58
Despite a furious rally from the Eagles of East Brewton and 31 points from Tyshawn Davis, the TRM Tigers defeated their rival WSN 73-58.
TRM built a 16-11 lead in the first quarter and outscored WSN 25-10 in the second quarter to build a 41-21 lead at the half.
In the third quarter, WSN outscored TRM 19-15 to cut the lead to 56-40 heading into the fourth quarter. In the fourth, WSN edged out TRM 18-17, but the Tigers were able to hang on for the win by 15 points.
For TRM, Chardian Johnson led with 21 points. Johnson was joined in double figures with Trae Walker’s 16 points and Trin Miller’s 12 points.
For WSN, along with Davis’ 31, Treylon Watson finished with 10 points.

Flomaton 58, WSN Lady Eagles 23
WSN finished their tournament 0-3 Saturday after Flomaton defeated them 58-23.
Floyd led with 14 points in the loss.
Flomaton led WSN early as they took a commanding 20-4 lead after one quarter. Flomaton went on to lead 35-12 at the half and 50-19 heading into the fourth quarter.
In the fourth, the Lady Hurricanes doubled up WSN 8-4.
WSN’s Floyd and Alexus Morris were named the all-tournament team.

WSN boys 75, Flomaton 51
In a battle for third and fourth place, WSN picked up their lone win of the tournament as they defeated Flomaton by 24 points, 75-51.
Davis once again led WSN as he finished with 26 points. Dalton Shell finished with 10 points and DJ Hodges added 15. Watson finished with 10 in the win.
Davis and Hodges were named to the all-tournament team.

TRM Lady Tigers 41, ECHS 36
Down 23-21 at the half, TRM’s Lady Tigers outscored Atmore 20-13 in the second half to get a 41-36 win and the county championship.
TRM led 13-12 after one quarter, but was outscored 11-8 in the second quarter to trail by two points at the half.
In the third quarter, TRM rallied with an 11-8 advantage to take a 32-31 lead into the fourth quarter.
In the fourth, TRM ended the game on a 9-5 run to get the win by five points.
Williams led TRM with 13 points while Ruzic had nine. Johnson led Atmore with 10 points.
Ruzic and Kyla Bell joined Williams on the all-tournament team for TRM while Nichole Johnson and Christine Simpkins were tabbed for ECHS.

ECHS boys 61, TRM 40
In a battle of two 2-0 teams for the boys tournament championship, ECHS took it to TRM early as they claimed their seventh straight title with a 61-40 win.
ECHS led TRM 17-9 after one quarter and 39-19 at the half following a 22-10 scoring advantage in the second quarter.
In the third quarter, TRM cut the lead to 50-32 with a 13-11 scoring advantage, but was outscored 11-8 in the final quarter to lose by 21 points.
Ten Blue Devils scored in the win as Devonte’ Lee led with 12 points and Dexter Williams added 11. Chille Ford finished with nine and Melik McMillan had eight.
For TRM, Johnson led with 20 points and Walker finished with 10.
Atmore’s Ford and Williams joined most outstanding player Jerome Webster on the all-tourney team.
TRM’s Walker and Walker made the team for the Tigers.