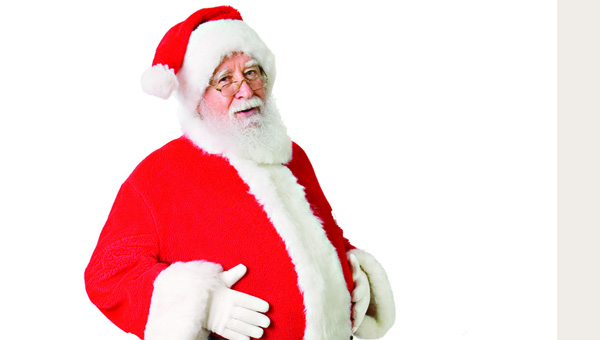 It’s almost that time of the year. This time tomorrow little children will be tearing into packages, whooping and running all around the house. Mom will be in the kitchen putting those finishing touches on Christmas dinner.
But somewhere to the north, there will be a jolly old man who will be putting his feet up on a footstool and getting some well earned rest after a busy year.
Santa Claus is not easy to catch up at this time of the year, but recently he was in Brewton for the Christmas parade and he took the time to be interviewed. He is a “right jolly old elf,” and his story is not to be missed.
Santa began his story on Christmas Eve in 1822 when author Clement Moore wrote the poem “Twas the Night Before Christmas” for his children. The poem swept over the world, and millions of children still listen to the words every Christmas Eve.
Everyone knows what Santa does, but many may not know these interesting facts.
“I love the scent of the trees and we put one in the house because it is so cold outside,” he said. “It makes a great place to put presents to keep them from being scattered all over the house.”
Santa also explained his look.
“The beard keeps me warm.” he said. “The rest come from the Bishop of Myra. He always wore a red robe, carried a shepherd’s cane, and, because he was a bishop, he wore a red pointed hat.”
Santa wanted to settle the question of the fireplace or lack of one, and explain that it is not a problem. Not only do the elves have magic, Santa does too. All he has to do is lay his finger aside of his nose.
“Ho, Ho, Ho!” he said. I can lay my finger aside of my nose and go up the chimney, down the chimney or just appear next to the Christmas tree. That bag of goodies has some magic too. Love fills small places and I can fit it all into my bag. The elves are very smart and with their magic, they know just what each child wants and they never make too many toys.
“Christmas is very special to me,” he added. “I also love it when I am back home from my round of delivering toys. Mrs. Claus and I put our feet up and share stories while we sip hot chocolate with marshmallows.”
Santa said that he and Mrs. Claus usually take the month of January off and go scuba diving in Aruba. Then they return to the North Pole to start all over again for the next Christmas.
“People need to care for one another,” he said. “Share with each other and be thankful for what you have. Thankfulness goes a long way. Be super accepting in your home. Love one another and remember that we are all God’s children and really that is the main reason we celebrate Christmas at all.”