Cheers & Tears: A year to remember for Brewton community 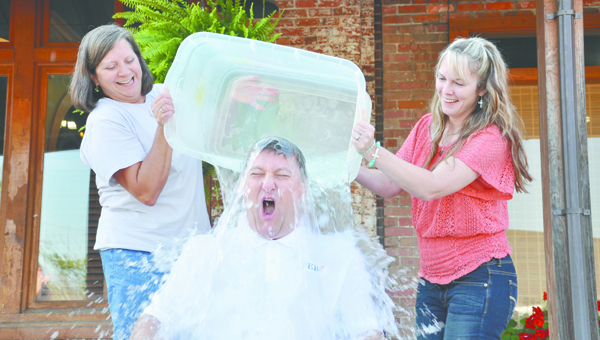 The top stories of 2014 showed the diversity of the community we call “home.” From the city garnering national media attention because of a sex case involving a former T.R. Miller band director to seeing the willingness of others to raise money for ALS in the “Ice Bucket Challenge,” it demonstrates the uniqueness of Brewton.
In 2014, new politicians were elected while another in the educational field said “goodbye.”
Here are the top stories of 2014: 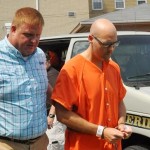 The former T. R. Miller band director accused of having deviant sex with students pleaded guilty in November to one felony and two misdemeanors.
Jeffrey Lance Gainous, or “Mr. G” as he was known to students, pleaded to one count of teacher having sexual act with a student, a class B felony, and two counts of sexual contact with a student. As per a plea agreement, Gainous was given a 20-year suspended sentence. He is to serve three years in the Escambia County Jail. Once released, he will have five years of supervised probation and be required to register as a convicted sex offender.

County elections
There were some new faces and old ones at the forefront after the 2014 election cycle.
County Commission Chairman David Stokes and Sheriff Grover Smith were respectively re-elected for four-year terms.
This year also saw the election of two new faces to county seats – Tax Assessor Thad Moore and Tax Collector Tim Pettis. Moore will replace longtime assessor Joy Wiggins, while Pettis will replace Jim Hildreth. Neither Wiggins nor Hildreth sought re-election.
Kevin Hoomes was elected to County School Board, Place No. 1 after defeating Debbie “Mrs. Mac” Quarles.

Animal control
Citing a lack of funding, the Escambia County Humane Society shelter closed its doors this summer.
“At this point, the board has decided that without other funding, we’re going to opt out of the shelter business and re-organize and be committed to spaying and neutering and education,” ECHS president Joe Thomas said in July.
In turn, the City of Brewton began handling its own animal control operations Aug. 1 at the city shelter located on Ala. Hwy. 29.
As 2015 progresses, the issue of animal control in Escambia County will remain an interesting topic.

Education
Locals received two big announcements in the educational field in 2014. The first was the retirement of city schools Superintendent Lynn Smith and the second, a new interim president at Jefferson Davis Community College.
Smith, who will leave the post on June 30, has served for 36 years with the Brewton City School System. The board has agreed to allow the Alabama Association of School Boards to head the selection process.
Chairman Stephanie Walker said the board wants the best candidate for the job and believes the AASB will help in that search.
As part of the AASB service, the group will advertise the search and recruit candidates; survey the community on the desired superintendent qualities and skills; receive and screen applicants; schedule interviews; provide interview guide for the board, and other services.
The search will begin in January.
In December, Dr. William O. Blow was appointed as interim JDCC president, effective Jan. 1. When asked about hiring a permanent JDCC president, ACCS stated the process would continue; however, that schedule has not been established at this time.

Battle of Murder Creek
While the Battle of Murder Creek has seen its share of classic games, the 2014 version, which was played on Halloween, will find itself in that category for years to come.
WSN led TRM 7-0 after one quarter of play and 7-0 at the half.
In the third quarter, TRM outscored the Eagles 10-3 to tie the game up at 10-all. After neither team scored in the fourth quarter, the game went into overtime. It was the first overtime in the BOMC since WSN won 14-8 over TRM in 2007 in East Brewton.
In overtime, WSN got the ball first and Malcolm Hawthorne scored on a 4-yard run and Trey Taylor added the PAT to give the Eagles a 17-10 lead.
On TRM’s first play in overtime, McHenry Coleman scored on a 10-yard run to cut the lead to 17-16.
Down 17-16 in overtime with a PAT conversion awaiting, T.R. Miller’s Chardian Johnson scored a two-point conversion for the T.R. Miller Tigers to give TRM an 18-17 win over W.S. Neal in the 2014 version of the Battle of Murder Creek. 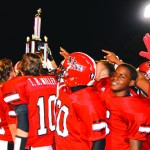 The TRM Tigers won the 2014 version of the Battle of Murder Creek by a score of 18-17 in overtime. The Tigers used a two-point conversion in the OT period to down the Eagles of East Brewton.

Work off city court fines? Program could allow for…