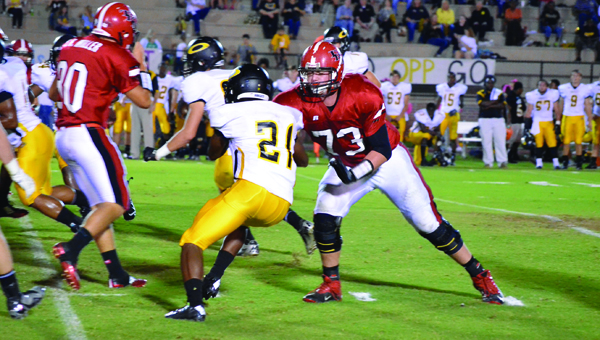 File photo | The Brewton Standard
T.R. Miller’s James Peach blocks against Opp in a game during the 2014 season. Peach has committed to play his college football at Southern Mississippi.

After committing to play football at the next level for the University of Southern Mississippi Eagles back in July, and with National Signing Day next month, T.R. Miller Tiger senior football player James Peach says he is still a firm commit and is looking forward to playing at the college level.
“Recruiting went well,” Peach said. “I am still firm with my commit to Southern Miss. I am just ready to go and play at the next level now.”
While he is firm in his commitment to head west to Hattiesburg to play at USM, Peach said there were some other schools that were looking at him as well.
“We had Western Kentucky, Troy, Samford, South Alabama,” Peach said. “But I am solid at USM. I just really enjoyed the coaches and the players up there and the atmosphere that they brought.”
In his senior season at TRM, Peach and the Tigers went 10-2 during the 2014 season. The Tigers lost to Opp in the regular season before falling to Montgomery Academy in the second round of the class 3A state playoffs. With that, Peach said the season did not end the way he and his other teammates wanted it to end.
“It didn’t meet our expectations of course,” he said. “It was a winning season and we got a lot accomplished. We also found out a lot about ourselves. It didn’t go as we hoped or anybody else had hoped.”
On a personal note, after being selected as a first-team all-state selection in Class 3A as a junior after the 2013 season, he was recently selected as a second-team all-state player for the 2014 season for offensive lineman in class 3A.
“It means a lot to me. It is a great honor to have it,” Peach said of the individual honor. “As for as my personal play for the 2014, I thought it went well. I played well, but everybody else in that locker room played well. Without them, we would not have gotten anywhere.”
So what does Peach want to accomplish at the college level?
“I just want to be the absolute best I can be,” he said.
National Signing Day is set for Feb. 4, 2015, and the Golden Eagles have 17 confirmed verbal commitments. USM head coach Todd Monken expects to sign 24 prospects along with Peach:
Copiah-Lincoln tight end Taylor Marini (December graduate), Trinity Valley Community College safety D’Nerius Antoine (December graduate), East Mississippi Community College safety Deshadrick Truly (December graduate), St. Aloysius offensive lineman Drake Dorbeck, Athens (Ala.) linebacker Paxton Schrimsher, Southwest Mississippi Community College offensive lineman Tyler Stutzman (December graduate), Butte (Calif.) Community College offensive lineman Dominique Harris, Dallas County (Ala.) offensive lineman Lowell Furlow, Tylertown linebacker Joseph Dillon, Pascagoula defensive tackle Jauan Collins, Hutchinson (Kan.) Community College receiver Juwan Dickey, Sacred Heart-Griffin (Ill.) quarterback Gabe Green, Limestone (Ala.) offensive lineman Dakota Siniard, Gulfport receiver Jonathan Nance, Clay-Chalkville (Ala.) defensive lineman LaDarius “Noochie” Harris and Oak Grove linebacker Isaiah Spencer.
Southern Miss went 3-9 overall in 2014 and finished 1-7 in conference play.
The Eagles ended their season on a five-game losing streak.