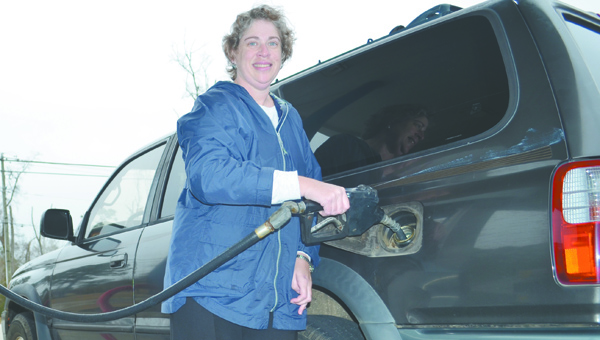 Adam Robinson | Brewton Standard
Kim Wade fills the tank of her Chevrolet Tuesday morning before heading out for errands.

How low will they go? That is the question some people may be asking when it comes to gas prices in the area, state and nation as prices in the Brewton area saw gas dip below $2 per gallon last week.
Todd Smith, who works with Mize Outdoor Care, was filling up his truck and equipment Tuesday morning at Tom Thumb in Brewton.
“I was driving by and I saw it was $1.92 a gallon,” Smith said. “I called my boss, Samuel Mize, and told him the price and asked him if he wanted me to get some and he told me to fill everything up.
“It usually takes us about 72 gallons to fill everything up,” he said. “I hope it continues to go down. I just hope it doesn’t go up in the summer.”
Smith said in summer months, it takes about 150 gallons to fill up everything.
Locally, some residents said they enjoy the lower gas prices, while some are not impressed.
Jake Simpson is one who said there is good and bad with it.
“While some enjoy the lower gas prices, there are some, who are taking pay cuts and even being laid off from there jobs in the oilfield,” he said. “So as with everything there is a good and a bad.”
Angelia Mullins said she is not impressed with the lower prices.
“It’s causing a lot of Americans their jobs, closing the avenue for our own American oil companies and opening the door for OPEC to be in control of the American people in a different way,” she said. “We all would like to get excited about saving money, but there’s a bigger picture and we as Americans need to stop looking at what is at our noses and look at that bigger picture.
“The few pennies you think you are saving now are going to cost us all more than a few dollars,” she said. “Wake up America.”
Lisa Kiser Harris is leary of the situation as well.
“I love the low prices, but I am wondering what this will cause us in the end,” she said.
Gilda Padgett feels the same way.
“I like the lower gas prices, but some how or someway, we Americans will pay for it in another way,” she said.
Lisa McCall had an interesting take on the gas prices.
“Since transportation cost are going down, why isn’t the cost of things in the stores?” she said. “And the economy is going to suffer when all the oilfield workers get laid off. The unemployment rate is going to go up.”
David Phillips encouraged citizens to stand up for their beliefs.
“This is our country and land of the free,” he said. “Use your rights to vote, to stand for your beliefs and to look back in time to how our grandparents and great grandparents lived. This is not the America I looked forward to 35 years ago when my late granddaddy warned me that this would happen. The good gas prices are going to bring lots of bad with it.”
According to gasoline price website GasBuddy.com, the average retail gasoline prices in Alabama have fallen 7.4 cents per gallon in the past week, averaging $1.98 per gallon Monday, according to GasBuddy’s daily survey of 3,348 gas outlets in Alabama. This compares with the national average that has fallen 5.4 cents per gallon in the last week to $2.12 per gallon.
Patrick DeHaan, senior petroleum analyst with GasBuddy, said “all in all, it wasn’t a bad week for motorists filling their tanks.”
“Since last week, some 12,000 stations dropped their price under $2 per gallon, with 45.1 percent of all gas stations (nearly 61,000) now selling under the $2 per gallon mark,” DeHaan said. “The national average currently stands at its lowest since May 9, 2009, a date that saw 8.9 percent unemployment and Phil Jackson coaching the Los Angeles Lakers toward the NBA title.”
DeHaan said this time around, the drop in gasoline is far more joyous and isn’t overshadowed by a polar plunge in the economy…and it doesn’t stop there.
“Overnight, the average price for diesel fuel in the U.S. dropped under $3 per gallon for the first time since Oct. 2, 2010, and will shed yet another 25-50 cents per gallon before reaching a bottom.”
Including the change in gas prices in Alabama during the past week, prices Monday were 113.5 cents per gallon lower than the same day one year ago and are 47.7 cents per gallon lower than a month ago. The national average has decreased 48.6 cents per gallon during the last month and stands 118.7-cents per gallon lower than this day one year ago.