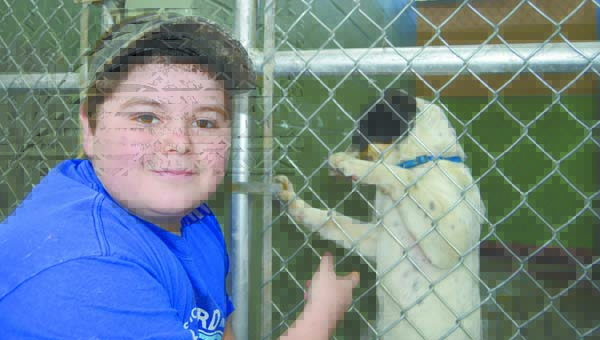 Stephanie Nelson | Brewton Standard
Brandon Burkett makes nice with one of the dogs inside the Brewton Animal Shelter. Burkett was trying very hard to convince his mother to allow the animal to come home with them.

After receiving numerous complaints about the operations at the Brewton Animal Shelter, Mayor Yank Lovelace, Councilman Fred Barton and The Brewton Standard conducted a surprise inspection last week, which showed no obvious issues.
Shelter manager Robbie Crenshaw was on site and led the tour.
In July, the Humane Society of Escambia County announced it would close the shelter’s doors after the City of Brewton opted to perform its own animal control services. That move reduced the shelter’s funding by more than $65,000 annually, and when the county could not meet the shortfall, the decision was made to stop operations on Aug. 31.
In the following months, both the newspaper and the city council received complaints – some from former Humane Society staff and others from residents – alleging animal mistreatment, poor housing conditions and incomplete record keeping.
Wednesday, Lovelace invited the newspaper to a surprise inspection to address those complaints.
“We figured the best way to address things was to go see it for ourselves,” Lovelace said. “And what we found was that things are operating as smoothly as they can with the resources in place.”
Statistics provided by the shelter showed 187 animals – cats, dogs and one donkey – were collected countywide processed through the shelter between October and January. Of those, 99 were euthanized and 36 were adopted.
On that Wednesday, at least two families were on site examining the animals.
“I am so hoping we get a dog,” said Brandon Burkett of Flomaton. Burkett, with his mother, aunt and other family members, traveled to Brewton solely to look for animals.
Each of the 10 dogs in the main shelter area had full food and water bowls, as well as blankets to ward off the cold. In the “nursery area,” a mother dog had given birth to five puppies only days before. The areas were clean and smelled clean.
“There’s been a lot of talk that this is just a kill shelter,” Crenshaw said. “It’s not. We don’t like to put animals down, but we can’t keep every one we rescue. Usually we wait between 10 and 15 days before they’re put down. The purebred dogs we keep even longer.”
Crenshaw and his assistant take turns collecting animals throughout the county and staffing the shelter. The facility is open to the public Monday through Friday from 7 a.m. until 4 p.m.
“We are here every day,” Crenshaw said. “The only time we’re not is when both of us have to go to Wal-Mart to pick up food donations. On the weekend, we alternate, but the animals are fed and watered and the facility cared for.
“But the fact of it is this – we’re animal control,” he said. “We don’t like to put animals down, but we can’t keep them here forever.”
There is a $40 adoption fee at the shelter, and to drop-off, surrender or reclaim an animal there is a $30 fee.