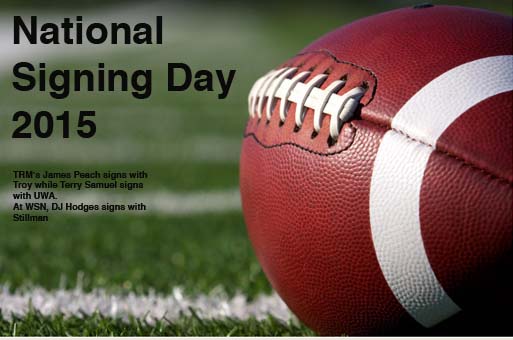 Three local players, two from T.R. Miller and one from W.S. Neal, joined other players across the nation Wednesday in signing their national letters of intents to play college football at the schools of their choice.
T.R. Miller duo James Peach and Terry Samuel signed their letters at 9 a.m. Wednesday in front of family, friends and coaches.
Peach, who originally was a firm verbal commit to the University of Southern Miss, inked his name with the Troy Trojans while Samuel signed with the University of West Alabama.
Across the creek at W.S. Neal, D.J. Hodges continued East Brewton’s feed to Stillman College as he signed his name with WSN graduate and Stillman head coach Teddy Keaton.

Terry Samuel:
“It feels pretty good,” Samuel said of signing to play football at the next level. “I finally get a chance to play college ball at the next level. It is something I have dreamed of as a kid, so it feels pretty good. I will be playing the outside linebacker, boundary backer position, strong safety. UWA had a great academic program there and the football program there is on the rise. They won the GSC conference championship in 2012 and 2013. Hopefully I can go there and get me a championship ring.”
Samuel is the son of Ronald and Tracie Travis.

James Peach:
“It feels great to have this opportunity to play at the next level,” Peach said. “I went to take my official visit to Troy and it was just unbelievable facilities there. They are putting a lot of money into their facilities there. They are closing in their stadium and doing a lot more stuff there for the football program. They went from 2006-2010 to winning the Sun Belt Conference championships. It just didn’t feel like they skipped a beat. Obviously they went down a little bit last year, but they have since brought in new coaches. They are great people to be around. I have signed on as an offensive lineman.”
Peach is the son of Chip and Ann Peach.

TRM head coach Jamie Riggs:
“First of all, I am proud of both of them for not only being able to go to college, but getting the chance to play college football as well,” Riggs said. “Terry worked really hard physically to get himself where he could be a really good player. When he got to us he was tall and skinny and not very strong. Through all his hard work, he developed so much physically that gave him some opportunities to do some things. I think another thing that got people’s attention is how hard he played. So I think that he will do very well. He will take the things that he has learned and he will go out and do very well for them.”

Riggs on Peach:
“I think the same thing for James,” Riggs said. “When he came up here, it was the same thing. He was tall and kind of slow. Eventually with all the physical work and things, he can physically move around and do some things a lot better. Both of them are good examples of hard work and determination. James is a really good competitor. I think he will do very well as well.” 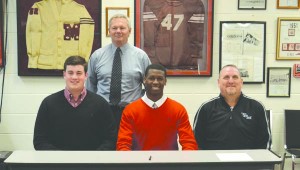 DJ Hodges:
“It is overwhelming feeling to be able to sign a college football scholarship today,” Hodges said. “It feels pretty good to know that I am going to college. Hard work pays off eventually, so it feels pretty good right now. It is more about the team chemistry there at Stillman. There are a lot of WSN players there that will help me. I wont be a big shot as a freshman. It is more about the team chemistry than just going to a college that you want to go to. I will be playing defensive end. I just want to get better and start something new. I want to represent WSN at Stillman and be the best I can be and make my mark there.”
Hodges is the son of Annalese Hodges.

WSN head coach Doug Hoehn:
“DJ was a freshman when I got here four years ago so it has been my pleasure to coach him these last four years,” Hoehn said. “He was our team captain this year and has been a three-year starter for us. His freshman year he got a lot of playing time, but he has been a starter for us these last three years. He has played both sides of the ball for us so we are going to miss him. We are happy for him. This is the most enjoyable part of the job for me, to see these kids go on. He chose Stillman and there will be five other kids from WSN up there that he knows. Stillman head coach Teddy Keaton is from this area. I have never seen another coach put in as much time here as he does. When he wants a kid here, he stays in contact 52 weeks of the year with them. I am happy for DJ and I hope it works out well for him.” 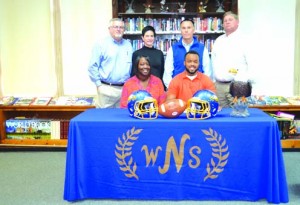