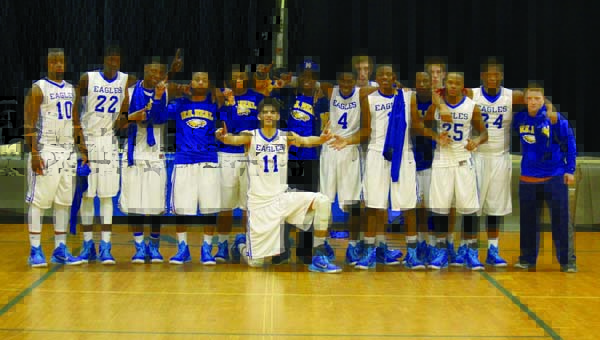 The W.S. Neal Eagle boys basketball team defeated the UMS-Wright Bulldogs for the third time this year Thursday night at home, but Thursday’s third win was a little bit more special this time.
Playing in the class 4A area 1 tournament championship, the Eagles of East Brewton downed the Bulldogs 59-48 to claim the championship. The win improved the Eagles to 14-10 overall and gives them the right to host the sub-regional round of the playoffs. Also, the win puts the Eagles one win shy of their combined win total from the past four seasons.
“We very excited and proud of our players for finishing the area with a great win,” WSN head coach Dewan Salter said. “Tyshawn Davis really stepped up and helped take control of the game along with Troy Lewis who shot the ball very well. DJ Hodges had a really good game on the boards rebounding. Just very proud of our total team effort.”
UMS led WSN 12-11 after one quarter of play. In the second quarter, WSN grabbed a 30-29 lead at the half after outscoring the Bulldogs 19-17 in the quarter.
Up by one at the half, WSN took control of the game in the third quarter with a 19-10 run to build a 49-39 lead heading into the fourth quarter. In the fourth, WSN outscored UMS 10-9 to get the win by 11 points.
Davis led the Eagles with 28 points. Davis added seven rebounds, four assists, one steal, and had three blocks.
Troy Lewis finished with a double-double as he had 17 points and 10 rebounds. Lewis added two steals.
Hodges led the team with 12 rebounds and contributed eight points, one assist and two steals.
Treylon Watson, JT Gantt and Darius Tolbert all had two points each.
WSN will host the area 3 runner-up in the sub-regional round of the playoffs. A tentative date is Tues., Feb. 10.
Making the all-tournament team for WSN was Watson, Hodges, Davis and Lewis.