Would you Go? City asks residents opinion on park 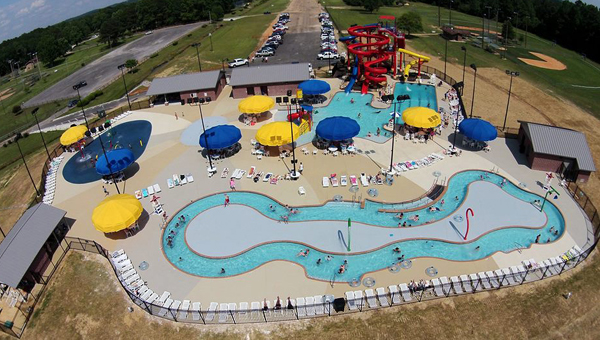 Based on comments at Thursday’s public meeting, a waterpark could be in the city’s future.
“What I want folks to remember is that is just an idea,” Mayor Yank Lovelace said. “If you don’t think a water park would work in Brewton, let us know. We need to know.
“There are several months and steps in this planning process,” he said. “First is the research period. Then, we get more input.”
The city has contracted with Goodwin, Mills and Caywood Engineering and St. Louis-based Counsilman-Hunsaker to perform a feasibility study, and representatives were on hand for the meetings.
Lovelace confessed the council was “skeptical” of the water park idea.
“That would be a big undertaking, and we have to make sure the people are behind it – no matter what the decision is,” he said. “We have to find something that is the right size. Maybe it’s not a water park. Maybe it’s ball fields. We need to look at different options, but we need to do something.”
Lovelace said he envisioned a $250,000 facility featuring multiple play areas, patios, a concession area and restrooms.
The feasibility process takes approximately six to nine months, followed by a six to nine month construction period, the Cousilman-Hunsaker representative said.
Lovelace said if the city pursued a water park, he would ask surrounding areas to sign a non-competing agreement.
The majority of the night’s comments centered around the need for “something for the young people to do.”
“Basically what we are looking to accomplish is something that will compliment the YMCA,” said Kirk Hawkins with Goodwin, Mills and Caywood Engineering. “And what we want to know is what do you think the facility needs to be successful.”
An example cited through the night was the water park facility in Fayette. Constructed in 18-months, this is will be the third summer for the park. The $2.2 million park was funded through a city bond measure and was recently expanded because of its success. Admission cost is $10 per person, and the facility is open from Memorial Day through August.
“A big concern was would the park compete with the Y,” Hawkins said. “We talked to Y officials, and none of us think so. In fact, we think it would compliment the Y pool. Because most of the time, people want to swim and play outdoors.”
Public input said that the facility should be self-sustaining and would give a much-needed boost to the local economy.
“People who come there would have to eat at our restaurants, shop at our stores and buy our gas,” one woman said.

Search on for city super