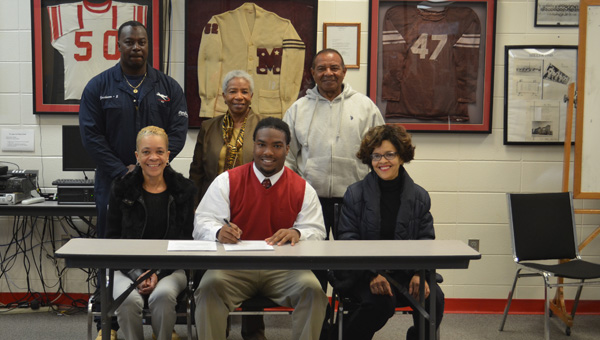 It may have come a few days after National Signing Day, but T.R. Miller’s McHenry Coleman on Thursday became the third Tiger to sign a college football scholarship as he signed with Mississippi College.
Coleman will play running back for MC.
“I am just blessed and very excited,” Coleman said. “I am just very excited to play at the next level. It is a dream come true. They have signed me as a running back. I just like the campus and I like the coaches. They are well-relaxed and they felt like they mean business. I believe I will fit right in there.”
Another reason Coleman said he liked MC is he will get to play against Terry Samuel who signed earlier with UWA.
“We are high school buddies,” he said. “I want to get my education first of all and then be an outstanding player. They gave me this scholarship to come play and that is what I intend to do. I am just blessed and thankful to be getting my education.”
TRM head football coach Jamie Riggs said MC will be getting a lot from Coleman.
“Usually when you hire someone from a job, usually you get less than hoped for when you hire them,” Riggs said. “They are not really good as you like. Sometimes you get more than you hoped for. Mississippi College has gotten a lot more than they had hoped for right now with McHenry. They will have it figured out here in a year.”
Riggs said Coleman is special in a lot of different ways including the aspects of leadership, his conduct, his work ethic and everything he does.
“They are going to be pleasantly surprised when they get him over there,” he said. “I think they know he can play football. I don’t they are quite aware what they will be getting, but they will in a short time. He will be highly successful. He will get a degree and make something of himself one day.”
At Thursday’s signing, Coleman was surrounded by his mom, Chiquita, and other family and friends, Riggs, principal Mary Bell and counselor Becky Edge.