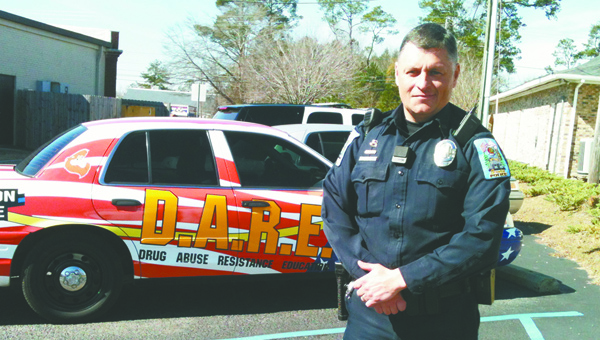 After more than 20 years of service with the Drug Abuse Resistance Education (D.A.R.E.) program. Captain Feast Broughton of the Brewton Police Department has passed the torch to fellow officer Heath Madison.
With the new assignment comes a new D.A.R.E. car. The red car driven for many years has been retired and a new Ford Crown Victoria draped in the stars and stripes has taken its place.
There is no danger of it being mistaken for anything except for the education of youngsters to prevent drug abuse. The design on the vehicle was created by the students.
The D.A.R.E. program began in California in 1983 to bring awareness and prevention of the use of drugs and violence in youngsters.
Capt. Broughton has brought the program into the schools for more than 20 years, and now, Madison has taken his place.
“I was already a police officer when I was approached about working with this program,” Madison said. “Right now we present the program to the Brewton City School Systems’ fifth grade classes.”
The program is organized into 45 to 60 minute classes taught once a week, and includes extended activities supported by their classroom teacher. The program has been very successful in influencing students to become positive role models for the younger students.
“Fifth graders are the right age for the D.A.R.E. program,” Madison said. “ The students are eager to be involved. I already have those who remember me from past classes who come up to me wherever they see me. It makes me proud to know that they are listening and getting a positive lesson out of the classes.”
Broughton said that the raising of funds for the program has never been a problem.
“We have always been able to get sponsors to cover the expense of buying t-shirts for the students,” he said. “We send out a letter to potential sponsors and in the more than 20 years, I have not had to beg for the funds. Businesses in our area have always stepped up and provided for what we needed.
“We work with the middle school age kids because they are the most receptive to the program,” he added. “At this age we hope to direct them away from going down the road of drug abuse and violence.”
Madison was born and raised here in Brewton. His father was a police officer with the city’s department, but he did follow in his father’s footsteps, at least not to begin with.
He attended the city school system and graduated from T.R. Miller High School in 1991 and then attended the University of Alabama.
After the attack on the United States on Sept 11, 2001, Madison said he felt the need and joined the military
“I felt like I should do something at the time,” he said. “I joined the U.S. Army and served during Iraqi Freedom. Serving your country gives you a feeling that you get no other way. I recommend it to others.”
After he left the military, Madison came back to this area and got a job at Marvin’s. It was there that Captain Broughton and Assistant Chief Randy Nicholson came to see him and asked him to consider coming on with the police department.
“I have heard it said that God never closes a window without opening another one and I think that is what happened to me,” Madison said. “I hadn’t planned on joining the police force, but that is just what I did.
“I went to the police academy in Selma for my police training and then went to the D.A.R.E. training in North Carolina,” he said. “I love working with the kids. I hope we can get to them at a young age and hope they decide to go down the right path.”