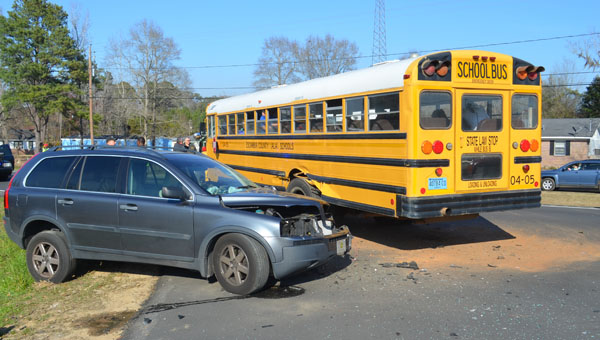 At approximately 3:15 p.m. Friday afternoon, a bus with the Escambia County Schools was involved in an accident with a vehicle. The wreck happened with a Volvo SUV at the intersection of Highway 41 and Neal Street in East Brewton. The Volvo had Pennsylvania license plates.
The school bus number was No. 04-05.
Two D.W. McMillan ambulances worked the scene along with the East Brewton Police Department, East Brewton Fire Department and the Escambia County Sheriff’s Department. School officials were also on the scene.
EC School’s Superintendent said there were no major injures in the wreck.
“Just some bumps and scrapes,” Knott said.
Students were loaded to another school bus and transported to DWM hospital.
“We are asking all parents to come to the hospital to check them out,” Knott said. “Once all cleared, they can be checked out. A triage area will be set up at hospital so parents can check them out. Schools are contacting all parents by phone now.”
Sgt. William Mosley with the East Brewton Police Department said he was still investigating the accident.
“Some kids were complaining of pain,” Mosley said. “Mostly just shook up. No extensive injuries.”
Larry Lambeth, transportation director with EC schools said four was taken to the hospital on the ambulance.
“We took four on the ambulance,” Lambeth said. “When we first got here everyone was OK except the one that was complaining about her back. When the ambulance got here, everyone was hurt. So, it is hard to tell with kids. We just felt like it was a better move to take them all to the hospital and let them be checked out there and then there parents could check on them. That is about all we know as of right now.”
Lambeth said the bus driver was OK.
“As far as I know all the kids are good,” the bus driver said. “They were just all scared.”
Please use caution in the area as traffic was backed up in the south bound lanes.
The driver of the Volvo was checked at the scene and had no injuries.
More information will be posted as soon as it is available.
For more photos from the wreck, see our Facebook page:
https://www.facebook.com/media/set/?set=a.10152659554517143.1073741843.73324917142&type=3 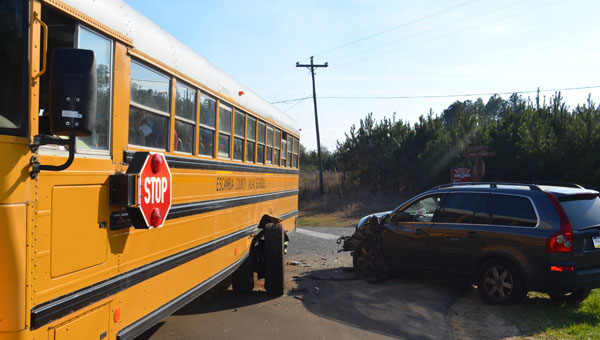