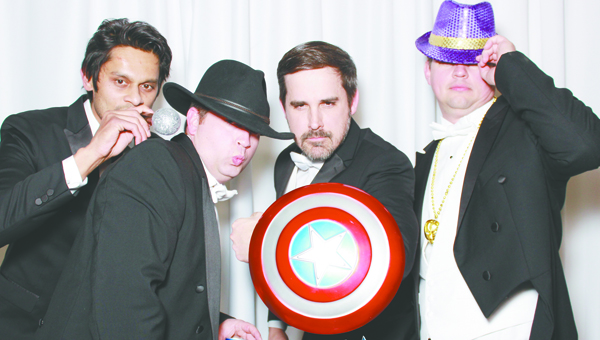 Photo of Pensacola Photobooth
Anand Patel, Wade Winstead, Andrew Clark and Mike Adams ham it up for the camera during the Wild at Heart’s annual Mardi Gras ball Relay for Life fundraiser. More photos will be featured in the upcoming editon of brewton: the magazine.

For those who’ve ever wanted to be in the movies, this year’s Brewton Relay for Life is your chance.
Themed “Lights; camera; take action” the April 18 event is highlighting the best of the movie world while raising money to fight cancer, and teams and sponsors are needed to make the event a success.
“Right now, we have five teams registered,” said organizer Christy Black. “We’d really like eight. We chose the movie theme because we thought it was something that people could have fun with.”
The world’s largest grassroots fundraising movement, Relay For Life mobilizes communities throughout the country to celebrate people who have battled cancer, remember loved ones lost, and provide participants with an opportunity to fight back against the disease. Relay For Life brings together friends, families, businesses, hospitals, schools, faith-based groups — people from all walks of life — all aimed at furthering the American Cancer Society’s vision of creating a world with less cancer and more birthdays.
And in Brewton, it’s no different.
“Everyone knows someone dealing with cancer,” Black said. “This event is a way to raise money to help bring those fights to an end.”
This year’s event will be held at the YMCA from noon until 9 p.m. beginning with opening ceremonies and the survivor’s lap immediately following.
“We’ll also be having a womanless beauty pageant, Relay Idol and ‘Don’t forget the lyrics’ competitions,” Black said. “It’s going to be a really fun day.”
Teams have begun announcing fundraisers and some include:
• the Trustmark Bank Relay for Life team’s “Bark for Life” on March 7 at Jennings Park. Registration will be held from 9 a.m. until 10 a.m., and activities will be from 10 a.m. to 1 p.m.; and,
• the D.W. McMillan Hospital’s Relay for Life team walk/5K run on April 11.
To register a team or become a sponsor, contact Black at 251.809.2132.