The search for a missing Elmore County teen could have local ties after an inmate allegedly found the boy’s phone north of Brewton Thursday.

Family is reporting that 15-year-old Andrew McLean of Holtville went missing this week. According to family’s Facebook posts, the teen was staying with an Elmore County man; however, 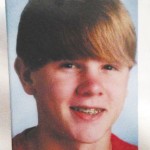 “He wouldn’t have let his phone go,” Jennifer Mclean posted.

The discovery could not be confirmed by local law enforcement; however, the public is asked to keep a look out for the teen.

He is described as medium build with sandy blond hair and brown eyes. Anyone with any information as to his whereabouts is asked to contact one’s local law enforcement agency.