Despite loss to WSN, TRM baseball repeats as ECT champions 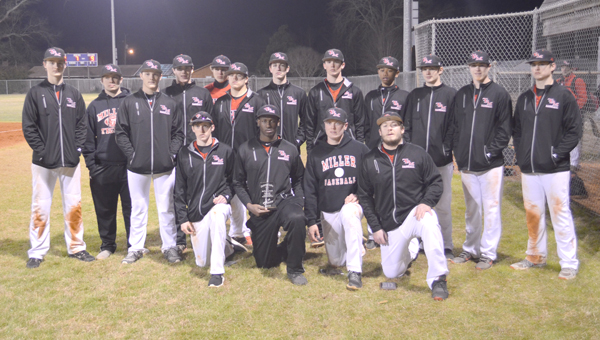 It may have not been the ideal way to win the 2015 Escambia County baseball tournament, but the T.R. Miller Tigers repeated as county champs Friday night in Atmore.
With a 2-0 record after defeating Atmore and Flomaton by the 10-run mercy rule Tuesday and Thursday, the Tigers of TRM matched up against rival W.S. Neal in the tournament finale. WSN came into the game with a 1-1 record and stunned the Tigers 10-9 in a back-and-forth game.
TRM went on to win the tournament championship after allowing the least amount of runs. TRM, WSN and Flomaton all finished 2-1 in tournament play.
“I am proud of the kids,” TRM head coach Jim Hart said. “In the first two games we played, at times, very well. Tonight, against W.S. Neal, we had seven errors. You make seven errors and you are not going to win very many ballgames.”
Hart said he thought both starting pitcher Hunter Brittain and reliever Russell Smith pitched very well in the loss.
“We just didn’t play any defense behind them,” Hart said. “We left too many men on bases, especially when they were in scoring position. I am tickled for the kids for winning the tournament. I would have liked for it to have been another way.”
On the other hand, WSN head coach Coy Campbell was proud of his teams for getting the win over TRM.
“We started off with Flomaton Tuesday night and played well,” Campbell said. “One inning turned the whole game around. Flomaton took advantage of our mistakes. Against Atmore Thursday, we swung the bats well. We scored some runs and got the win. Tonight against Miller, it was another one of those T.R. Miller/W.S. Neal games.
“It was back-and-forth the whole night with both teams fighting hard. We were able to come up with the big hit there at the end to put us ahead. Coming into the game with TRM, after what they had done the first two days, nobody really gave us a chance. Our kids played hard and I am really proud of their efforts.”
After starting the season 0-3, WSN is now on a two-game winning steak. Campbell said he hopes the win over TRM will help his team the rest of the year.
“We struggled to open the year,” Campbell said. “We have some kids that this is their first time playing and they are being put in some situations. This win should definitely help us and give us some confidence. Like I told the kids, there are only four games you have to be good for and that is your area games. Not that we like losing. We are not accustomed to it and we are not going to start now. Our kids play hard like they do year in and year out.”
In the game Friday, WSN led TRM 3-2 after one inning and 5-2 after three innings. TRM then looked to take control of the game as they struck for six runs in the fourth to claim an 8-5 lead. From there, TRM tied things up with three of their own in the bottom half of the inning. After TRM took a 9-8 lead in the fifth, WSN scored two in the bottom of the sixth to take a 10-9 lead. With the game-tying run on third base in the seventh for TRM, WSN held the Tigers scoreless to seal the win by one run.
WSN’s runs in the sixth inning came from Malcolm Hawthorne stealing home and an RBI single from Dakota Graves to score Miles Powell. Graves hit came with two outs and a no balls and two strikes count.
For WSN at the plate, Dalton Shell had a single and one RBI while Powell had two singles and one RBI. Graves added three singles and one RBI while Alex O’Keane had a single.
The Eagles used four pitchers in the win with Jared Cooper getting the win.
Dalton Shell went the first three innings and allowed two hits, five runs, walked four, struck out and hit three batters. Colton Morris went 1/3 of an inning and allowed one hit, three runs and walked three.
Lane Chavers went the next 1 2/3 innings and allowed one hit, one run, walked three and struck out one.
Cooper came in in the top of the sixth inning with the Eagles down 9-8. Cooper went two innings and allowed one hit, walked two and struck out five.
For TRM at the plate, Jones Manning, Drew Williamson, Hunter Brittain, Chris Jones and Jordan Williams all had singles. Manning had one RBI while Brittain and Jones had two each.
On the mound, Brittain got the start and went four innings and allowed four hits, eight runs, walked two and struck out eight.
Smith took the loss as he went the final two innings and allowed three hits, two runs, walked three and struck out three. The duo allowed three earned runs.
TRM left nine runners on base including seven in scoring position and had one runner thrown out at the plate.

Making the all-tournament team for the 2015 Escambia County Tournament were:
TRM- Jones Manning, Tim McDonald, Chris Jones, MVP Hunter Brittain
WSN- Jared Cooper, Dalton Shell and Dakota Graves
Flomaton- Andrew Cash and Trey Weeks
ECHS- Tanner Smith
Flomaton went 2-1 in tournament play with their lone loss coming to T.R. Miller on Thursday. ECHS went 0-2.
On Tuesday, TRM defeated Atmore 12-1 while WSN lost to Flomaton 8-4 in extra innings.
On Thursday, WSN defeated Atmore 20-2, while TRM took down Flomaton 16-2.
In the earlier game on Friday, Flomaton defeated Atmore 3-1.
The win for TRM made them back-to-back tournament champions for the first time since the 2003 and 2004 seasons.
The last team to repeat as tournament champions was WSN during the 2009 and 2010 seasons.
TRM won the tiebreaker over WSN by allowing the least amount of runs. TRM outscored their opponents 37-13 while WSN held a 34-19 advantage over their opponents. Flomaton took third place with a 2-1 record, but was outscored 13-21. ECHS took fourth place after going 0-3 and being outscored 4-35. 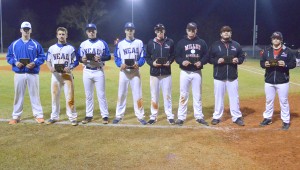