Chamber names Chapman, Hayeses as citizens of the year 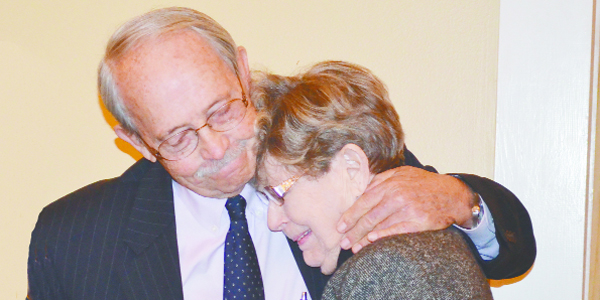 Dr. and Mrs. Hayes share a moment at the podium after the announcement.

Dr. Robert “Bob” and Ellen Hayes were chosen as one of the Greater Brewton Area Chamber of Commerce’s citizen of the year for 2014.

The Hayes moved to Brewton in 1960 so that Dr. Hayes could care for patients at the D.W.  McMillan Hospital and Brewton Medical Center.

Nominated and introduced by local Realtor Sandy English, the couple is best known for their

“For more than 50 years, Dr. Hayes has shared his knowledge and love for the people of Brewton as a man and a doctor,” English said. “As a man and a woman of compassion, together they have shared their benevolence for years. Brewton is a better place because of them.”

English revealed the couple will leave Brewton at the end of the month to be closer to family in Pennsylvania. When Hayes accepted the award, he spoke of losing two sons to drunk drivers and how God led the couple on a mission to help the homeless.

“That night, praying beside the bed where my son died, I asked Him, ‘What do you want of us?’” Hayes said.  “The thing about it is, when you ask Him, you better be ready when He answers.

“I was shopping for groceries and passed by a homeless man with a sign that said, ‘Will work for food,’” he said. “And a voice, as clear as my own now, said, ‘You’re going to drive by that hungry man with a car full of groceries?’

“I turned around and he was gone, but the thought was not,” he said.

It was then the couple found their calling, he said.

“For 19 years, that’s been us,” he said. “It’s been so wonderful to help those in need, and if we leave a legacy here, maybe it’s that we helped those less fortunate than us.” that said, ‘Will work for food,’” he said. “And a voice, as clear as my own now, said, ‘You’re going to drive by that hungry man with a car full of groceries?’

“I turned around and he was gone, but the thought was not,” he said.

It was then the couple found their calling in working with the homeless, he said. 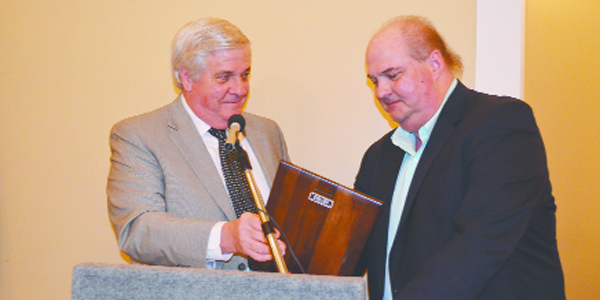 Roger “Mr. Big” Chapman was one of the Greater Brewton Area Chamber of Commerce’s citizens of the year for 2014.

Nominated and introduced by local attorney Ed Hines, Chapman is best known for his dedication to Brewton sports and community service.

Chapman, a University of Alabama graduate and former football player under legendary Coach Paul “Bear” Bryant, was surprised at the event by his two children and numerous co-workers. He served as the voice of T.R. Miller High School football and was the host of “Coffee with the Mayor” on Channel 6.

“If your child ever played sports, he either coached or had some hand in it,” Hines said. “Bottom line is, if the cause was worthwhile, he’d join it and eventually head it up.”

Chapman and his wife, Amy, moved to Brewton more than 30 years ago.

“Even though I grew up in Hartselle,” Chapman said, “this is home to me. This is my hometown. I thank you for letting me and us be a part of it.”

“Roger is what my father used to describe simply as a ‘good man,’” Hines said.  “And that simple description spoke volumes about a man’s reputation and character. For all of us, and generations to come, Roger will serve as a shining example of what it means to be a good citizen.”