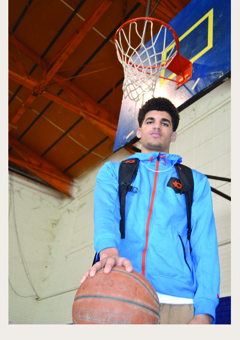 W.S. Neal basketball player Tyshawn Davis has recently been selected to play for the No. 1-ranked team in AAU basketball in Birmingham. The team kept 10 players and he was the No. 2 overall pick by the team.
“I played AAU last year with a team out of Mobile, but it was not that big of a deal there,” Davis said. “I just wanted to try out for something bigger and to have a better opportunity. So I tried out for the best team in AAU in Birmingham and I made it. They are called the Birmingham Ice. It was life changing when I got the call saying I had made it. I am just really proud of myself. I thought I could do, but when it happened, it really shocked.”
AAU games will mostly be played in the summer, but Davis will practice during the school year.
“We will play in big cities like Dallas, Las Vegas, Atlanta, Mississippi and places like that,” he said. “It is kind of just like a showcase. There will be different colleges at these games. So we will get to showoff our talents. This is for ages 17U.”
Davis, 16, said his main goal is to get his name out to different colleges.
“I also want to just get the experience to make me a better player physically and mentally,” Davis said. “Currently, no schools are looking at me right now.”
The 6-foot-7-inches junior helped led W.S. Neal’s basketball team to one of their best seasons in years as they went 14-11 overall and finished as regular season and area tournament champions. The 14 wins for WSN during the 2014-15 season were one shy of 15 combined wins from the last four years.
Davis scored 422 points this season and had 133 rebounds and 63 assists. Davis average 17.6 points a game for the Eagles of East Brewton.
Davis said this past year, head basketball coach Dewan Salter told the team that nobody thought they could do anything. But Davis and the rest of the team just had to put all that aside.
“We worked hard and all came together as a team,” Davis said. “Coach Salter really challenged us at practice. He challenged us mentally really about the way people talked about us. He told us to not let that bother us because at the end of the day, the only person that could beat us was ourselves and the ways that we think. He told us if we went into every game thinking we could win, then we possibly would.”
Davis said they just tried hard and worked hard and stuck to what Salter told them to do. “Now, everyone wants to win a championship,” Davis said. “We just came up short against Clarke County. They had beaten us by 30 points both teams in the regular season. Then we lose by four in the sub-regionals, so we improved. Next year, we hope to be better.”
Also during the record breaking historic season for WSN this year, Davis broke a record that stood at the school since 1968.
Davis broke a record for scoring this season as he tallied 46 points in a game this season. The previous record was 45 points set by Danny Parker back in 1968.
“We started out the game and I just felt something. Something just felt different,” he said. “I actually thought it was going to be a bad game for me. I was a little under the weather, but I made my first couple of shots and my teammates just told me to keep shooting. I want to thank them for getting me the ball and trusting in me. Coach also trusted in me and just told me to keep shooting. It just happened to be my night.”
Davis, who has been playing basketball ever since I could remember, started playing in the second grade, but didn’t really get serious about it until eighth grade.
He said his dream is to play college ball or higher, but his ultimate dream is really go to college and then come back and coach at basketball at W.S. Neal High School.
“I want to accomplish more as a coach than I have already as a player,” he said.
Davis said he is really happy for himself for making the AAU team.
“I just want to thank everybody for all they have done for me, especially my mom,” he said. “It just means a lot. My mom has been there through it all. I also want to thank coach Salter. He believed in me and pushed me. He told me he sees something in me, but he is going to push me to see what it really is. So he has really been pushing me to make me work.”
Davis also said he wants to thank the seniors on this years team especially DJ Hodges.
“He is a great guy,” he said. “My eighth grade year, I played varsity, and he has been my big brother. He pushed me every day at practice. He has been a big part of my life and we have grown really close. I thank him for pushing me and it made me become the player I am now. I want to leave the legacy that they left on me. It really did change. All the seniors this year, they were all just great.”