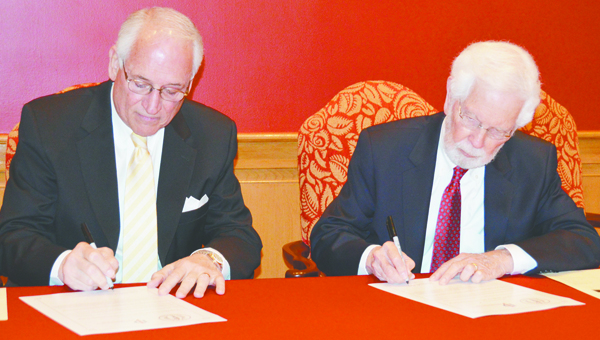 Troy University and Jefferson Davis Community College officials signed an agreement Wednesday that will enable transfer students to complete their associate’s degree while pursuing their bachelor’s degree.
The reverse transfer agreement permits former JDCC students who transfer to Troy to transfer eligible credits back to JDCC for the purpose of attaining an associate degree. Students qualified for reverse transfer will have earned at least 15 semester credit hours from JDCC, will have earned at least three semester credit hours from Troy University, and will be in good standing at both institutions.
Dr. Jack Hawkins Jr., Chancellor of Troy University, said there has always been a strong link between the Alabama Community College System and TROY and that such agreements make good sense.
“This opportunity to reward students for the work they do – even though they may do it in reverse order – is still good business,” Dr. Hawkins said. “It makes sense and dollars for those graduates and speaks well of both the two-year system and the universities.”
Hawkins said he felt a “kinship” with JDCC as some 120 students currently enrolled at Troy began at JDCC.
“You do a good job of preparing them,” Hawkins told faculty. “For us, this kind of agreement makes dollars and sense. It rewards the students for the work they have done while saving them money, and it allows the two-year system to claim those numbers as graduates.”
Dr. William O. Blow, JDCC interim president, agreed.
“We teach a broad spectrum of students,” Blow said. “This reverse transfer agreement we have with Troy is such an innovative thing. It’s great student service, and we are so happy to join Troy University in this effort.
“It is our most important role to prepare students for what’s ahead,” he said. “This agreement helps us do that.”
The agreement with JDCC is the latest is the latest of several such partnerships for TROY. Agreements have been previously entered with Chattahoochee Valley Community College, Southern Union State Community College, Lurleen B. Wallace Community College, Wallace Community College and Enterprise State Community College.

Taco Bell to open in May