Taco Bell to open in May 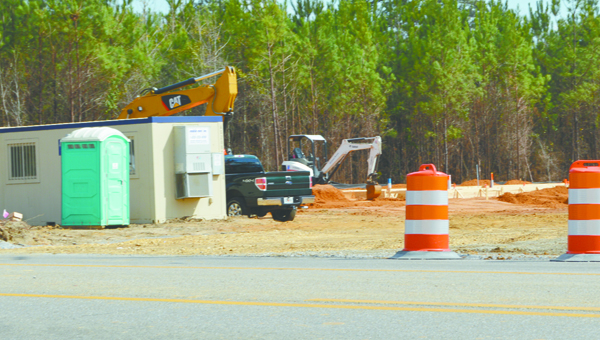 It will be summer before the new Brewton Taco Bell opens.
Courtney Wright with Tacala LLC’s marketing department, said Monday doors to Brewton’s newest eating establishment should open in May.
“We are, as many can see, officially under construction,” Wright said. “Right now, we’re projecting an opening of mid May. As we get closer to that date, we’ll have a better idea.
“As you know, construction schedules have a tendency to change,” she said. “Even with this crazy weather, we hope we can stay on schedule.”
On Monday, crews filled the site for the new 2,681 square-foot store. Some were working on electrical issues while motor grading crews worked on the property.
Wright said some 35 positions have been filled, but hiring for the new location is still ongoing.
“This isn’t the first time Taco Bell has been in Brewton,” she said of the franchise’s 2009 local closing. “Obviously, we’re excited to be back in the community. Once things are finalized, we plan to have a grand opening.”
Wright said the store’s official hours will be 7 a.m. until 1 a.m., seven-days-a-week.
“Some restaurants are open 24 hours; others close at midnight, while some close at 2 a.m.,” she said. “That being said, that determination was made based on market size and other factors.”
Tacala LLC – the largest Taco Bell franchisee in the county and the franchisee behind the Atmore store – began advertising for management candidates in March.