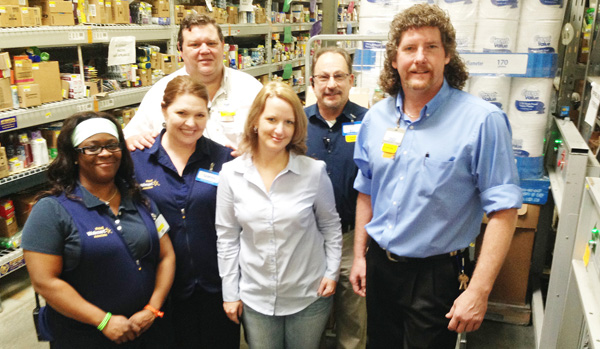 Chuck McCall, new Brewton Wal-Mart manager, poses with store employees, Liz Robinson; Bill Bari, Belinda Brazile and Toby Gagiano. McCall was a contestant on the 22nd season of the CBS hit show, The Amazing Race. He has been with Wal-Mart for 14 years and was recently transferred from Daphne.

Wal-Mart is the last place one might expect to find a celebrity – especially one wearing the company’s trademark navy blue.
But, in Brewton, that’s exactly what one has in the store’s new manager, Chuck McCall.
McCall, a 14-year Wal-Mart employee, made his way to Brewton from the Daphne store – but it wasn’t before he and his wife were featured on the 22nd season of the CBS hit show, Amazing Race. The show follows 11 teams of two as they travel the globe, performing physical and mental feats, to try and win $1 million.
“The first thing people notice about me is my hair,” McCall said. “And everyone made fun of my hair; every country we went to. If you Google me, it’s all about my hair. ‘It’s business in the front, party in the back.’”
And for McCall, it is back to business. For the last month, McCall has worked to get to know his new staff and the community; however, he said his time on the show was a “unique and wonderful experience.” His friend and Survivor star Bobby Jon Drinkard – a Troy native – nominated the McCalls for the show.
“I started out with a pharmacy company called Pharmore,” he said. “I worked for them for 20 years. When they went out of business, I found myself looking for a new job. I found Wal-Mart. They took me in as an assistant manager because of my retail experience, and here I am. With Wal-Mart, the sky is the limit.”
McCall said he’s worked in the Mobile, Saraland, Daphne and Theodore stores during his tenure at Wal-Mart. This is his first manager’s position.
“One night, Bobby Jon came to dinner,” he said. “It was after Survivor. He said I told the network people I thought you and Wynona should be on the Amazing Race, and I brushed it off.
“A few weeks later, the network started calling,” McCall said. “And we did it.”
The couple visited a number of exotic locations – Bora Bora, New Zealand, Bali, Indonesia, South Africa and the Swiss Alps – but now, they are working to settle into Brewton.
“I grew up in a small town in Ohio,” McCall said. “I love to hunt and fish, and this is the perfect area for that. We’re looking at buying 20 acres here, so maybe I’ll get a chance to get outdoors.”
As for the $1 million Amazing Race prize,” Well, you can see I didn’t win that,” McCall said with a laugh. “We finished fifth out of the group, but got a penalty and ended the show in sixth place. Still, it was a great experience. We had a blast.”