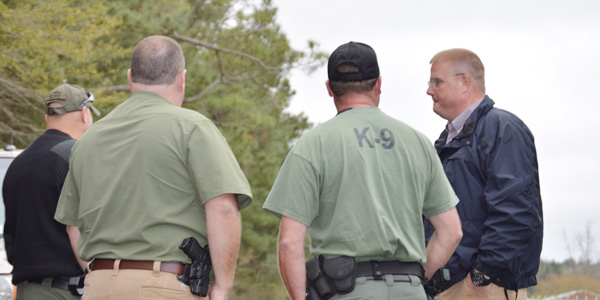 A Brewton man, wanted on drug charges by the Poarch Creek Tribal Police and who fled this morning from police, is now in custody.

K-9 units from Escambia County, Ala., and Fla., began searching the areas around Riddle Road in the hunt for Donnie Turner. 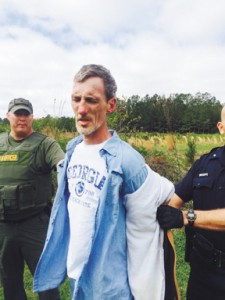 “He was found about three miles from where he fled, hiding in a house behind a barn,” Lambert said of Turner. “K-9 unit from Fountain Prison gave chase as Turner fled. After another short pursuit, Turner was taken into custody without incident.”

Lambert said officers found an assortment of drugs and drug paraphernalia on Turner at the time of his arrest.

“We found ICE, pure ICE and meth, as well as paraphernalia, including a set of scales,” Lambert said.

Turner was transported to the Escambia County Detention Center and is being held without bond.

Area K-9 units now are searching for a Brewton man wanted by Poarch Creek Tribal Police on an assortment of drug charges.

K-9 units from Escambia County, Ala., and Fla., are on scene near Riddle Road and are on the hunt for Donnie Turner.

“Right now, we have teams searching for Mr. Turner,” McGougin said. “This morning we received the felony warrants from Poarch. When a narcotics officer attempted to make contact with Mr. Turner at a home on Riddle Road, Mr. Turner – who was having a cup of coffee at about 7:40 a.m. – noticed the officer and fled.”

Anyone with any information as to Turner’s whereabouts is asked to contact a local law enforcement agency.

The Brewton Police Department is being assisted in the search by members of the Escambia County sheriffs’ offices in Alabama and Florida, as well as state police.