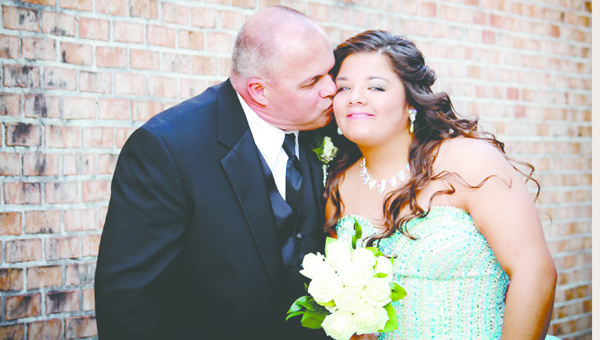 Every girl wants her prom to be spectacular. For W.S. Neal senior Peyton Madden, that was her mission when she asked her “Paw Paw,” Brewton police officer Hal Parker, to be her date for the Saturday event.
“Everybody knows Peyton, and they know how special she is,” Madden said. “Let me tell you, she’s something now.”
Born with congenetive hypothyroidism, the teen doesn’t let anything stand in her way, her mother, Christy Powell, said.
“She has always been that way,” Powell said of her daughter. “Whatever Peyton wanted to do or try, she did. Prom was no different.”
Parker said he saw Madden and her brother at school one day right after homecoming. He joked that it was too bad she wasn’t elected homecoming queen because he “would’ve sure like to take her across that field.”
“Then I said, ‘What about prom?’” he said. “ She said I thought you were going to take me.”
The rest is prom history.
Madden said she scored her “awesome blue princess” dress from a Mobile store and paired with “rockin’ glitter boots.”
Her mother arranged for the prom works – a salon appointment and a session with local photographer Ashley Bray of TuTu Cute Photography.
“Paw Paw’s got a tux,” Madden said. “He’s going to look good.”
A huge Luke Bryan fan, Madden said before the event she planned to dance the night away, and Powell said that’s exactly what she did.
“They had a great time,” she said of the couple. “They danced, went to the Huddle House and wanted to go bowling, but decided that the crowd was probably too much.”
Madden is the daughter of Christy Powell of Brewton and David Madden.