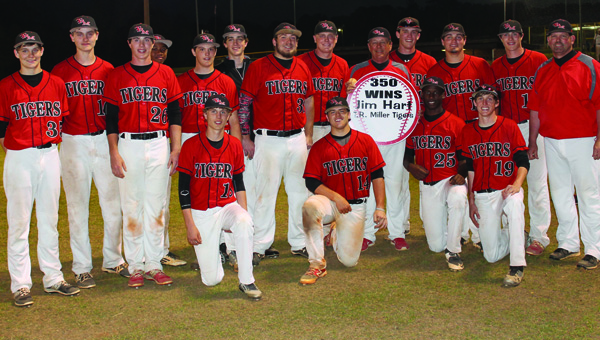 Already having defeated Andalusia on Monday in their tournament opener in Opp, the No. 6-ranked T.R. Miller Tigers baseball team went 2-0 on Tuesday to go a perfect 3-0 in the Spring Break Tournament.
On Monday, TRM defeated Andalusia 8-7. On Tuesday, TRM defeated Straughn 12-2 and Brantley 22-5. The wins improved TRM to 17-1 overall this season. The Tigers have now won 15 straight games.
TRM’s 22-5 win over Brantley was Tigers head coach Jim Hart’s 350th win. Hart is in his final season as head coach for the Tigers.
TRM was one of three teams to go 3-0 in the tournament as Opp and W.S. Neal also went 3-0. Opp won the tournament by tiebreaker as they gave up six runs to TRM’s 14 and WSN’s 21.

Tuesday game one: TRM 12, Straughn 2
JoJo Booker held Straughn to two runs on three hits and the Tigers of TRM pounded out 12 hits as they defeated Straughn 12-2 in six innings.
Booker went the complete game on the mound and allowed three hits, two earned runs, walked four and struck out six in the win.
While TRM pounded out 12 hits at the plate, they were led by Hunter Brittain’s 3-for-4 day. Brittain had a double and a homerun and four RBIs.
Drew Williamson and Chris Jones both had doubles in the win.
Jones Manning, Trip Floyd, Tim McDonald, Booker and Caleb Winton all had one hit each while Williamson and Chris Jones had two each.
Manning had two RBIs while Williamson, Booker, Jones and Jordan Williams all had one RBI each.

Tuesday game two: TRM 22, Brantley 5
The Tigers capped off a perfect 3-0 tournament and gave head coach Jim Hart his 350th win in a big way as they cruised to a 22-5 win over Brantley. The Tigers had 27 hits in the win.
TRM led Brantley 10-5 after six innings before erupting for 12 runs in the top of the seventh to propel them to the 17-run win.
Twelve different Tigers had a hit in the win as Williamson had three doubles and two RBIs and Booker had two doubles and three RBIs.
Jones Manning led with five hits while Tripp Floyd had three hits and four RBIs. Brittain added two hits and two RBIs while Tim McDonald had one hit and two RBIs. Williamson had two RBIs and Booker had four hits and three RBIs.
Chris Jones had one RBI along with Joshua Winton who had one hit in the win. Caleb Winton had one RBI and Brooks Brown had a hit and one RBI.
Jordan Williams added two hits and two RBIs while Stokes Jennings and Russell Smith had two hits each. Smith had one RBI in the win. Noah Purdie finished with a hit and one RBI.
On the mound, Floyd and Smith pitched in the win with Floyd being the pitcher of record.
Floyd went the first four innings and allowed four hits, four runs, two earned, walked two, struck out 10 and hit three batters.
Smith went the final three innings and allowed three hits, one earned run, walked one, hit one and struck out six.

WSN baseball goes 3-0 in Opp to finish in…