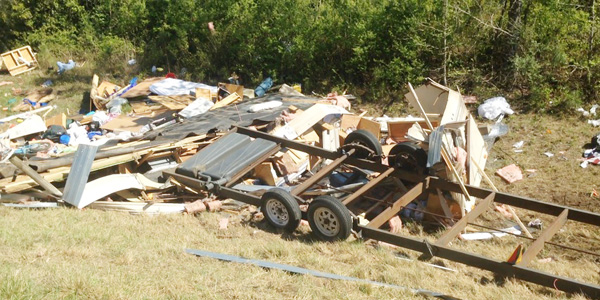 Debris was everywhere along the side of I-65 between Brewton and Flomaton Friday after a van towing a travel trailer overturned. Six occupants – including five children – were injured. Three occupants were life-flighted to a Florida hospital.

Six people – including five children – were critically injured Thursday in a crash on I-65 north between Brewton and Flomaton.

Three of the injured were airlifted to a Florida hospital while the remaining three were transported to local hospitals, Chief Deputy Mike Lambert said.

The accident occurred at the 73-mile marker at approximately 2:30 p.m. involving a Michigan family in a Ford E350 van pulling a travel trailer.

Katelyn Sudduth and her family from Winston County, Ala., were in front of the van when the crash occurred.

“The wind was really bad,” she said. “We could see the camper swerving back and forth between the lanes. We were going about 75, and they were right there behind us.

“We sped up to 85, trying to get away, but they were still coming,” she said. “That’s when they switched lanes and things went bad. The trailer went sideways, and then it all just rolled I don’t know how many times.

“There were five kids, one adult and a dog,” she said. “The dog looks OK, but the others – well, we hope they’re going to be OK.

“One boy, he landed in the bushes, but he wasn’t hurt,” she said.

Lambert said two of the occupants were ejected from the vehicle; however, no official word was available on the condition of the remaining occupants.

The side of the interstate was littered with debris – including bicycles, toys, clothes and mattresses – as emergency personnel from the Escambia County Sheriff’s Office, Flomaton and Poarch Tribal police departments, Pineview Volunteer Fire Department and the Escambia County EMS worked the scene.

To view a video of the crash scene, click I-65 crash web.