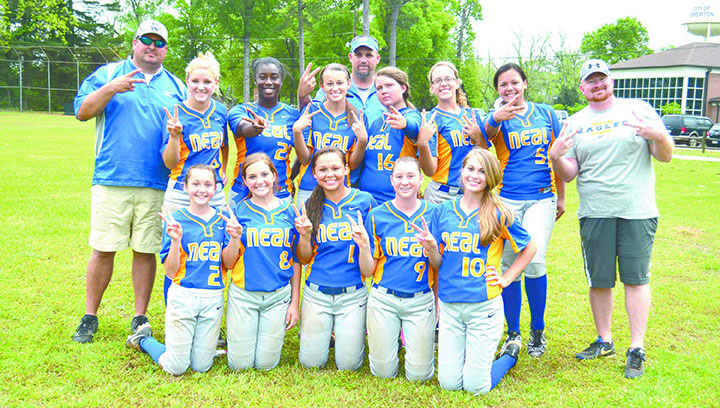 The W.S. Neal Lady Eagles softball team picked up their second Escambia County softball tournament championship in four seasons Saturday at JDCC as they went 2-0-1 in tourney play.
The Lady Eagles defeated Flomaton 4-3 in game one, tied T.R. Miller 0-0 in eight innings and defeated Escambia County 4-1 in their final game of the day. The wins improved WSN to 7-12-1 this season.
WSN head coach Jeff Haney said he was really proud of his teams for their hard work in the tourney.
“We are proud to get the win and proud to get the championship back to W.S. Neal,” Haney said. “It is nice to be the only school in the county that has won it twice. Our girls did a great job and I am proud of every one of them. We hope to keep this momentum going. Haleigh Dubose did a great job of pitching two straight games. We scored some runs.
“I can’t say how happy I am to be here and how happy I am of all the girls. The coaching staff did well. Coach Jason Blaney did a great job of calling pitches. I am just glad to get the win and get that championship back to W.S. Neal High School.”
On the other hand, T.R. Miller’s struggles in the tournament continued again this year as they went 0-1-2.
TRM started off the tournament with an 8-7 loss to Escambia County. In game two, TRM tied WSN 0-0 in eight innings and Flomaton 9-9 in eight innings. TRM is now 12-5-2.
TRM head coach Greg White said his team had chances in all three games and they could easily be 3-0 right now.
“Instead we are 0-1-2,” he said. “If we make a few plays here and there and get a few hits, we could have won all three games. That is on us and nobody else. We just have to get back to doing what we do. We have been in a little rut lately and it is catching up to us. We are just going to have to go back to work. We have about a month left to go in the season and we are going to have to get it going.

Game one: WSN 4, Flomaton 3
In game one Friday, WSN held off Flomaton 4-3 in a game shortened by one inning due to darkness and weather conditions.
Haleigh Dubose pitched WSN to the win as she went six innings and allowed five hits, three earned runs, walked none and struck out two. Dubose hit two batters in the win.
At the plate, Karissa Johnson, Dubose and Brianna Pugh all had a double each. Madison Winchester, Adria Barnett, Dubose and Erin Hartsel had one RBI each.
Johnson led with two hits while Winchester, Barnett and Tori Wyatt had one hit each.

Game two: WSN 0, TRM 0 (8 innings)
Neither WSN nor TRM scored in eight innings of play as the teams took a tie against each other in their second game of the tournament Saturday morning.
Dubose pitched all eight innings for WSN as she went allowed two hits, struck out two and walked one batter.
Taylor Austin pitched for TRM and went all eight innings and allowed six hits, struck out five and walked two batters.
Myra Reiss and Grace Ruzic had the only two hits for TRM.
For WSN, Johnson, Winchester, Barnett, Dubose, Hartsel and Wyatt all had the hits for WSN. WSN left the bases loaded in the fourth inning.

Game three: WSN 4, ECHS 1
Needing a win against ECHS to claim the tournament championship, WSN earned a 4-1 win to get the job done.
Dubose earned the pitching win as she allowed two hits, one unearned run, walked one and struck out 12.
At the plate, Winchester had a double and Dubose had two doubles. Dubose added two RBIs while Winchester had one.
Wyatt had added a hit for the Lady Eagles.

TRM game one: ECHS 8, TRM 7
Escambia County scored six runs in the fourth inning and held on to defeat TRM 8-7 in game one. TRM led 3-0 in the top of the fourth, before allowing ECHS’ six runs.
Down 8-3 in the sixth inning, TRM scored four runs to get within one run, but took the loss.
For TRM at the plate, Kaleigh Folsom, Grace Ruzic, Anna Grace White, and Morgan Longmire had one hit each while Madison Douglas had two. Folsom’s hit was a double. Folsom led with two RBIs while Longmire, Krystal Bell and Amelia Peach had one RBI each.
White took the pitching loss as she went five innings and allowed four hits, eight runs, two earned, walked four, struck out one and hit two batters.

Game three: TRM 9, Flomaton 9 (8 innings)
In a back-and-forth game, TRM earned their second straight tie in eight innings as they tied Flomaton 9-9.
TRM led 2-0 after one inning and 3-2 after three innings. The Lady Tigers fell behind 6-3 in the top of the seventh, but tied the game at 6-all in the bottom of the inning. In the eighth inning, Flomaton scored three runs to lead 9-6. In the bottom of the inning, the Lady Tigers rallied once again to tie the game at 9-all. The Lady Tigers stranded the winning run on third base.
At the plate, Steely Ruzic had three hits along with Myra Reiss. Mallori Floyd had two hits with Mary Madison Brown. Taylor Austin, Bell and Grace Ruzic had one hit each. Reiss led with two RBIs while Steely Ruzic, Austin, Brown, Bell and Grace Ruzic had one each.
Austin pitched in the tie as she went all eight innings and allowed eight hits, eight runs, four earned, walked four, struck out two and hit two batters.