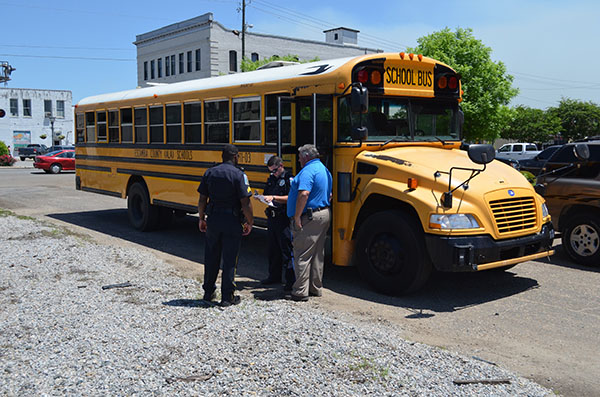 The driver of a Jeep Cherokee that hit an Escambia County school bus around lunch time today in Brewton has been arrested.
Charity Andrews, 29 and of Brewton, was arrested following the accident.
“She had an active warrant and has now been charged with leaving the scene of an accident,” Lt. Brock Holt of the Brewton Police Department said.
Holt said Andrews was apprehended by BPD officer Layne Herrington.

Earlier story:
An Escambia County school bus (bus No. 11-03) was involved in a hit-and-run around noon Wednesday morning at the downtown intersection of Highways 31 and 41. No children were injured in the wreck.
“All kids are OK,” Larry Lamberth, transportation director with the county schools said. “Our driver was stopped at the track and was rear-ended by a Jeep. The Jeep left on 31 South. Emergency crews came to the scene and checked the students out to see if they were all OK. All were and they were loaded onto another bus and proceeded onto the trade school.”
The Jeep is said to be gray in color and is a late-model Jeep Cherokee. The driver was a female.
Anyone with any information about this vehicle should contact the Brewton Police Department.