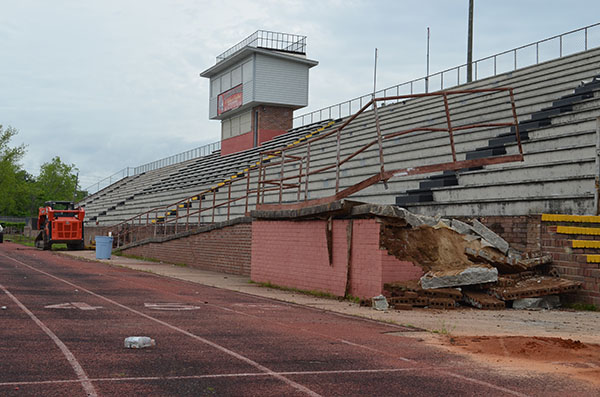 An increase in construction costs means there will be no new concession stand or bathrooms at the T.R. Miller baseball field.
The work, which is part of a $1.715 million renovation project at the baseball and football fields, began last Tuesday. Bids for the project came in at $1.96 million, which required $246,000 in cuts to the project, Superintendent Lynn Smith said.
“We bid what we wanted to build, and the bid came in over budget,” Smith said. “The baseball field will see new restrooms and concession stand when the money becomes available.”
At both fields, there will be a much-noticed change in the coming months, Smith said.
“We expect to do lighting at the football and baseball fields in May,” he said. “I’m not sure when we will begin work on the baseball field. Hopefully, we can begin in the early summer.”
TRM athletic director and head football coach Jamie Riggs said current plans for the baseball field includes new fencing, lighting and new dugouts for the field itself.
“So, when done, the baseball field should look completely revamped,” he said. “We had plans to build a new restrooms and concessions up there (at the baseball field) as well, but we ran out of money.
“Unless some other funds become available, we are putting that on hold for the time being,” he said.
At the football field, the start of the 2015 season will feature new lighting, commentary from a new press box, seating for home fans and handicap-accessible walkways.
It is unknown when demolition of the current press box will take place, Smith said.
“I do know it needs to come down really soon,” he said. “They are supposed to deliver the concrete bleachers to fill in the area of where the current press box is sometime this month.”
The new press box will feature seven viewing spots and area for video recording, he said.
Riggs said work to the home bleachers will mimic that of work to the visitor’s bleachers.
“Essentially they are going to re-brick the home bleachers so that when they are done, they will look brand new,” he said.
Fred Chambliss with Amity Construction Company, Inc., the construction company working on the project at TRM, said they are excited to be performing the renovations to the T. R. Miller athletic facilities and that the work they will be doing includes an almost complete makeover to the football stadium that will include a new press box that is approximately double the existing and a completely new exterior.
“The baseball field will be re-grassed, have new fencing and scoreboard and additionally there will be an all new concrete surfaced plaza between the football stadium and the baseball field,” Chambliss said. “Eventually there will be new bleachers and press box, but they’re on hold right now due to the budget. The only major deviation from the original plan was the deletion of a new concession/toilet that would serve both the football and the baseball fields. There are plans to add it back some time in the future. Upon completion of the entire project at some time in the future T. R. Miller will have have a first class athletic facility.”