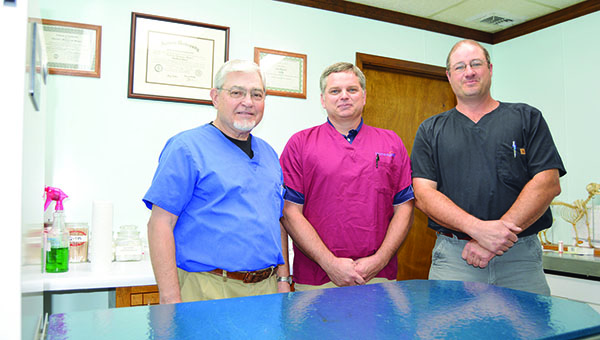 It seems that man’s best friend has two new ones in Brewton after Dr. John Bagwell recently sold his practice, Brewton Animal Clinic, to Dr. Troy Jones of Andalusia and Dr. Hal Noble of Evergreen.
“Now, that doesn’t mean that I’m going anywhere,” Bagwell said to his clients – and their furry friends. “I just felt like it was time to make a change. These fine doctors are going to let me work as long as I want to. I don’t plan to retire anytime soon.”
Bagwell, a 67-yesar-old Auburn graduate, began the local veterinarian hospital in 1973. In 1980, he was joined by the late Dr. Terry Parker, who passed away in 2004 after battling cancer.
Throughout the years, Bagwell has worked to bring cutting edge technology to animal care in Brewton. The office currently features a dental room, boarding and grooming facilities, a surgical room and in-house lab.
“I love being a vet,” Bagwell said. “I was working at a gas station in Luverne when Dr. McCreary came through. He told me what he did, and it just struck something in me. I made the right choice.”
But all that hard work, while rewarding, doesn’t leave much free time, Bagwell said, which lead to the decision to sell the practice. Plus, his wife, Cheryl, a fifth grade teacher at Brewton Middle School, plans to retire at the end of the school year.
“It will be nice to have someone handling those afterhours calls and emergencies,” he said jokingly.
And it’s a job that both Jones and Noble are happy to accept.
“Nothing is going to change around here except there’s going to be two new faces,” Jones said.
Noble, who has relocated from Evergreen to Brewton, is thrilled to be a part of the community, he said.
“Brewton has been great for us,” Noble said of wife Trish and their two children, Christopher, a freshman at T.R. Miller, and Patrick, a fourth grader at Brewton Elementary School. “We – all of us – are excited to be practicing here.”
Both Jones and Noble will continue to operate their practices in Evergreen and Andalusia.