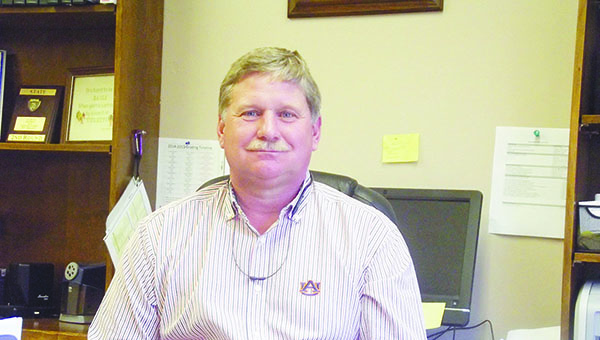 When Todd Williamson was a little boy, he never dreamed that he would wind up in the education field.
“It never crossed my mind that I would become a teacher and administrator some day,” he said. “But here I am and I love what I do.”
Williamson is the school administrator at the Escambia Careeer Readiness Center on Pea Ridge Road. Hard work has never been a problem with him. Even when he was a teenager, he was working on the Neal farm on Ridge Road. He thought he might become a veterinarian at one time, but he said he really had no goal in mind at the time.
“I didn’t know what I wanted to do with my life,” he said. “I was a typical teenager just going to school and having fun.”
Williamson was born and raised in East Brewton. He attended school at W.S. Neal in the county system and graduated in 1982. He got a job working on the Neal farm while he was attending school and afterwards. He married and he and his wife, Linda, became parents of Spencer.
“I just wanted to make a living for my family,” he said. “Mr. Tom Neal called me in and talked to me about going to college. He told me to step back and look at what I might want to do.I told him I couldn’t afford to go to college with a family to support. He helped me to be able to go to Auburn University and I graduated in 1993.
“During that time Mr. Tom died, and I was asked to come back to the farm and work for the Neal Trust,” he said. “I worked out there for 20 years. I was called by Philip Ellis and David Lanier. David was the ag teacher but he was leaving and they wanted me to take his place teaching ag class at W.S. Neal High School.”
He later became the assistant principal and served in both positions for a while. He made the move to the Escambia Career Readiness Center a couple of years ago.
The goals of both school and career school is much the same but the routes taken to attain that goal can be very different. Children in the school system are taught and prepared for the day they graduate and go on to college. Statistics show that there are a good many students who will not attend college, and there is a need to train those who do not..
“There was a time when trade schools were looked on as dumping grounds for students who did not do well in school,” Williamson said. “That perception is changing. Many of our students today are already working in their profession even before they graduate from high school. And many of them earn more than I do.
“Their skills are needed just as much as a college graduate. I have two sons, Spencer and Logan. Both of them are firefighters. Logan is with the Brewton Fire Department and Spencer is with Poarch. They didn’t learn that in school and they both make more than I do. I have seen first hand how valuable a trade is.”