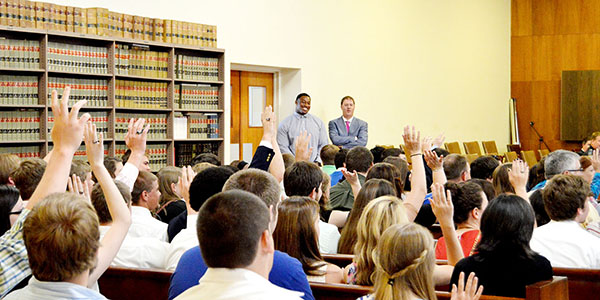 Spence, who remained out on a $3,000 bond following his Jan. 14 arrest, faced charges of misdemeanor marijuana possession, drug paraphernalia possession and speeding, after a trooper found marijuana and a grinder inside Spence’s rental car.

During the morning, students were instructed on the legal system and court rules and procedures. A student jury was then chosen to hear the case. The practice is an annual event hosted by the Escambia County Bar Association and attended Friday by T.R. Miller, W.S. Neal and Flomaton high schools and Cornerstone Christian Academy. Students from the Atmore area attended on Thursday.

Spence agreed to have his case used as a learning tool for students, the court said.

Spence was stopped in Flomaton in January by Alabama State Troopers after he was clocked traveling 103 mph in a 65-mph zone. The trooper testified that after smelling the odor of green marijuana, a K-9 unit was requested. The K-9 unit later alerted to the presence of the marijuana in the rental car’s center navigational console.

During the trial, Spence, who admitted to previously smoking marijuana, testified the drugs were left inside the car by friends. He admitted to owning a grinder found inside the plastic bag of marijuana.

Rice said the undecided charges would remain on his docket and be handled “legally and accordingly in the future.”