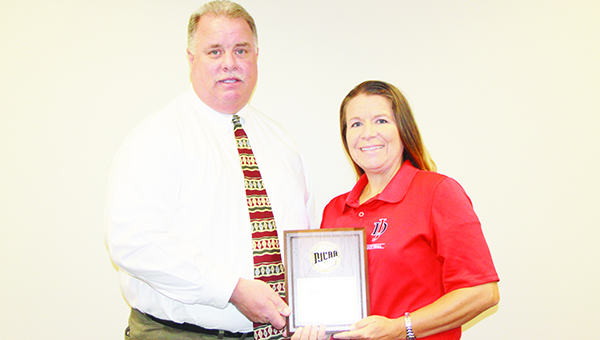 Jefferson Davis Community College Lady Warhawks softball head coach Misti Nims was recently named Coach of the Year for the Alabama Community College Conference Region 22. Nims led JDCC to a 32-29 overall record this past season.
“I was shocked when I received the news,” Nims said. “ I want to thank the coaches within the state that voted for me. I want to also thank ‘#TEAM14’ for their hard work this year and buying into my coaching philosophy. This is a team award. Without the players, past and present, this award is not possible.”
Nims started her coaching career at JDCC back in 2001. She took over a program that had some success and began to rebuild.
“I remember interviewing for the job and sitting in with then Athletic Director Karen Reynolds and I was scared for my life,” Nims said. “Coach Reynolds was amazing and I am so thankful that she along with the administration gave me an opportunity to start my coaching career.”
Nims not only started as the softball coach at JDCC, but she then took over the volleyball program back in 2003 for 10 years, as she coached both sports.
“It is has only been two years without both sports, and I look back wondering how was I able to do that”, Nims said.
While beginning her coaching career, she also went back to school to obtain her Master’s Degree at University of West Florida to become an instructor at JDCC in 2005.
“The beginning of my coaching career was very busy to say the least,” Nims said. “I did not have much time on my hands. When I did, I was out recruiting, practicing, or studying, which studying then transitioned into lectures and grading papers.”
Since starting her softball coaching career, Nims has had some great success. She has taken nine of the 14 teams to the state tournament, has produced over 60 All-Conference players, 13 All-State players and has helped over 30 athletes continue their softball career.
According to Nims, this past season was, by far, the best season under her helm at JDCC.
Nims and the team finished third in conference and earned their seventh straight trip to the State tournament.
While Nims was also named as coach of the year, she offered thanks to many who have helped her and impacted her life along the way.
“Assistant Coach Ed Johnson also deserves a big thanks,” noted Nims. “Ed has been by my side for eight years as a volunteer. That says a lot about his love for the JDCC softball program.”
Nims also thanked the community.
“We have a lot of local players come through this program,” she said. “I want to continue to build this softball program with our local talent and hopefully bring home a championship.”
Nims also wanted to thank her mentors, Pensacola State College Coach Brenda Pena, Pensacola State College and Tate High School Coach Charlene Varnell.
“I have learned so much from both of them including the knowledge of the game and the importance of the small things,” Nims said.
Nims also said JDCC’s Dean of Students/Athletic Director, David Jones, has the been fully supportive of all JDCC sports.
“And I thank him for that,” she said. “It makes my job much easier. As any year, without the support from our administration, faculty, and staff, our success not only on the field, but also in the classroom would be difficult. We take pride in the classroom and continue to be ranked nationally for our team GPA.”
With 2015 under their belts, Nims said she has big plans for the 2015-2016 season. “We have 13 players returning, six of them started at various times throughout this past season, and a talented incoming freshman group that has experience at a championship level,” she said. “I am excited to see the continued success of our softball program and hope that we can continue a strong tradition of pride not only on the field but in the classroom.”