Brewton to say ‘goodbye’ to Bracken’s 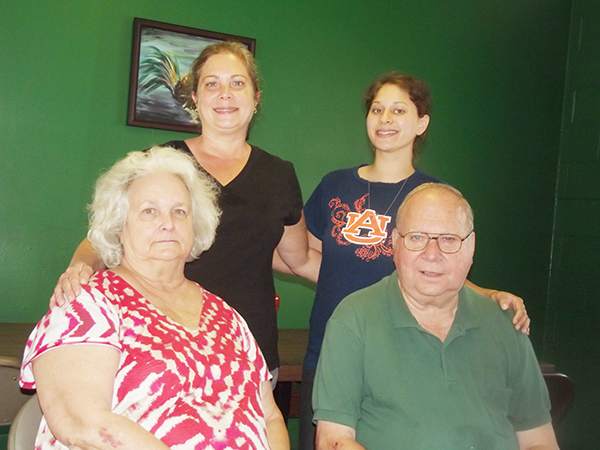 Lydia Grimes | The Brewton Standard
The Pettis family works each day in Bracken’s.

A long time tradition in Brewton will soon end as Bracken’s, the Brewton eatery famous for its hamburgers, is sold.
Located on Hwy. 31 South, store owners LaPrade and LaVenia Pettis have put up the “for sale” sign and are just waiting for someone to buy the business so they can retire to do other things.
It began as Bracken’s Big R and has been home owned and operated continuously since July of 1963.
“We are doing this with mixed emotions,” said LaVenia Pettis. “It’s not going to be easy to close the doors, but it is just getting to be a little more than we can handle.
“Family members have moved on to other things and we are just not able to carry it on any longer,” she said. “I don’t know just how much longer we will be here but they may just have to carry me out feet first.”
LaVenia’s father, Myron J. Bracken spent his early years in the grocery business, but with the coming of big grocery chains to the area, he closed his grocery store and looked to do something else. The lowly hamburger was making a big splash during this time and McDonald’s was working on its first million. According to Lavenia, her father said he believed that he could make a good hamburger. He needed a job and he liked to eat, so he purchased a Big R franchise. He bought some land on Hwy. 31 South, built a building and went into business. For the next 30 years, Myron J. Bracken and his wife, Helen, operated the business with the help of their children. The Big R was dropped from the name and it became Bracken’s, even though it is still listed as Big R in the telephone book.
When Bracken decided to step down, his son, Bubba, his daughter, LaVenia and her husband, LaPrade Pettis took over. Eventually the Pettis family took it on themselves to operate and added a small bakery and dining room. After two years, they closed the bakery, but continued to use the dining room.
“People are so used to coming to the window to order,” said LaPrade Pettis. “We have this nice dining room but most people still come to the window to order.”
For many years Bracken’s had enough space that they placed picnic tables outside under the trees. It was not unusual for families to pick up their food and eat at the tables. Reunions and other big dinners were also held there, but with time, that space was taken for other businesses.
Today, LaPrade and LaVenia are joined by their daughter, Cindy and granddaughter, Sara, to take care of Bracken’s but Sara will soon be going to school, so it’s getting harder to get everything done.
“I am looking forward with mixed emotions,” LaVenia said. “Our customers have been very faithful and understanding and we have truly been blessed. God has taken care of us so far and He will decide what happens next.
“Every day is different,” she said. “Now that we have the sign put out, people are being reminded of all those years and their experiences.”
For those who have tried Mrs. Helen’s chicken salad, or a Bracken’s special hamburger, get them while you can. They are open from 10 a.m. until 2 p.m. every day except Sunday and Monday. They are also open from 4:30 to 7 p.m. on Thursday and Friday and they serve a lunch special each day.

City BOE retirees to be honored; graduation dates and…