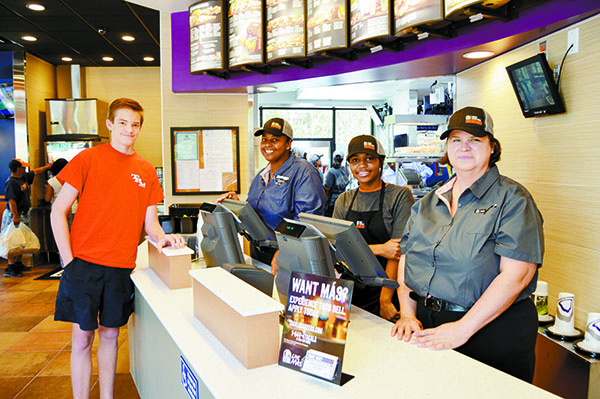 Douglas Avenue was filled with people making a run for the border bright and early Monday as the Taco Bell opened its doors.
The new freestanding building opened its doors at 7 a.m., giving the chain an appearance in Brewton after a six-year absence.
“It’s so exciting,” said Kimberly Johnson, Brewton Standard Facebook friend.
As were staff members, management and taco lovers as traffic stretched around the building at lunch Monday. Brewton Police were on-hand to assist with traffic.
Kim Edgar, regional general manager, said some 42 people are employed at the local restaurant.
“We’re happy to be in Brewton,” Edgar said.
Those wanting to enjoy the fare will have ample opportunities, she said.
“We are open seven-days-a-week,” she said. “Our lobby will be open from 7 a.m. until 11 p.m. Monday through Thursday and the drive-thru until 1 a.m.
“On Friday and Saturday, we’ll close the lobby at midnight and the drive-thru at 2 a.m.,” she said.
The Brewton location is the latest opened by Tacala, Inc., the nation’s largest Taco Bell franchisee in the county.
“Since exiting Brewton at the end of our Franchise Agreement in 2009, we have been looking for the right opportunity to return to the area.”, said Tim Morrison, president and COO of the Tacala Companies.
“We have slowly increased our presence in South Alabama with successful store openings in Greeneville, Atmore and Andalusia, and we are very excited to re-join the community of Brewton,” he said.
The new restaurant continues the tremendous growth of the Tacala operates 265 locations throughout the Southeast US and Texas, Morrison said.