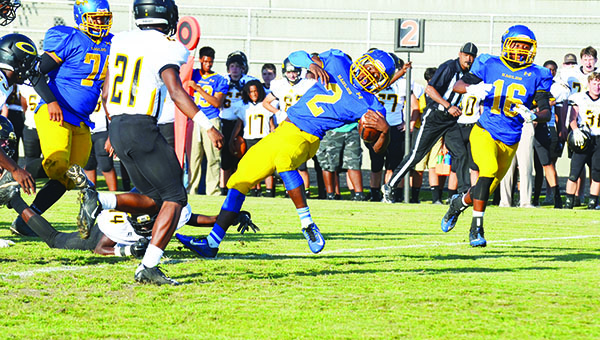 The W.S. Neal Eagle football team cruised their way to a 40-6 win over the Opp Bobcats Friday night at home to end their two-week spring training period.
The Eagles led Opp 34-6 after three quarters of play. The JV Eagles played the fourth and final quarter of the game and outscored Opp 6-0 to help aid in the 34-point win.
WSN led Opp 6-0 after one quarter and 20-6 at the half.
In the third quarter, WSN outscored Opp 14-0.
WSN head coach Dough Hoehn said he was pleased with his team’s performance Friday night.
“I am proud of the kids,” Hoehn said. “They played hard and physical. We didn’t have many missed assignments and that is good. We had too many turnovers and we will address that next week when we come back for summer workouts.”
WSN got on the board first when Jacobey Hawthorne hooked up with Bryce Booker for a 17-yard score with 3:56 left in the quareter.
Opp tied things up with a 48-yard run with 4:30 left in the second half.
From there, WSN scored 14 points to end the quarter with a 20-6 lead.
WSN’s Malcolm Hawthorne scored on a 35-yard run with 3:18 left.
J. Hawthorne then hooked up with Troy Lewis with 3.2 seconds left before the half to put WSN on top by 14 at the halftime break.
In the second half, J.T. Gantt scored on a 1-yard run to give WSN a 26-6 lead with 4:03 left in the third quarter.
Quenton Samuel added the final varsity score of the night as he scored on a 63-yard run to put WSN up 34-6 with 42.7 left in the quarter.
In the fourth, Peyton Salter scored on 5-yard run with 4:42 left in the game to propel WSN to the win.
M. Hawthorne led with over 100 yards rushing for WSN.
J. Hawthorne was 3-for-3 passing with 30 yards.
WSN had 20 first downs in the win to Opp’s 10.