Persistence pays off: Lodge gets scholarship to JDCC baseball 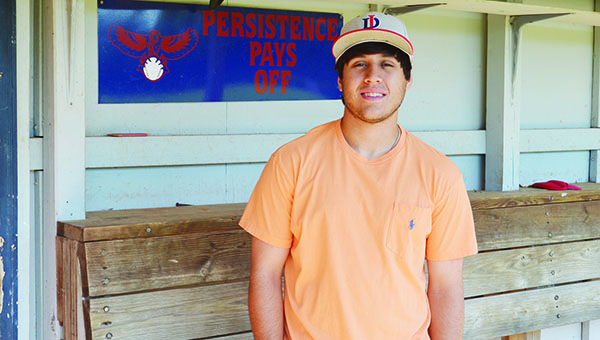 A sign in the Jefferson Davis Community College Warhawk baseball team’s dugout says, “persistence pays off.”
That sign easily describes former T.R. Miller baseball player Caden Lodge.
A 2014 graduate of TRM, Lodge walked on at JDCC this past season. The persistence and work ethic that Lodge brought to the field at JDCC recently earned him a scholarship for the upcoming season with the Warhawks.
“It feels good,” Lodge said of recently signing the scholarship. “I sat down with Coach Darrell Blevins and shot him an email last year when they were on their way to the state tournament. He said we could meet and we ended up meeting. I told him I planned to come to JDCC and I wanted to try and earn a scholarship. He told me they didn’t have any for me that year. I told him that was fine and I didn’t mind working for it and he said he would see what we could do.”
Lodge’s words he spoke to Blevins were not fluff as he meant what he said and he now has accomplished what he said he wanted to do.
“I got to accomplish what I came here to accomplish and it felt really good to get that done,” Lodge said. “I am just grateful for the opportunity for it honestly.”
During the spring season of 2015, Lodge said he mainly just kept to himself and stayed laid back.

“I approached coach Blevins about it and he came up to me just about every day trying to help me improve my game,” he said. “I played my role until I got the opportunity to play whether it was running bases, pinch hitting or playing on defense. I just did what I was told.”
Blevins said he knew of Lodge and his family and knew without a doubt there was some toughness there.
“That was the thing that was intriguing to me,” he said. “I knew he was going to bring some toughness and some grit. I knew he was going to bring a good work effort.”
Blevins said while toughness was known, they also knew coming in there was some areas to improve upon.
“Everyone has those, but there were specifics that had to get better like throwing, bunting, hitting the ball the other way on offense,” Blevins said. “There were some skill things he could do. Defensively there was nothing wrong of how he could track the balls down and the effort he gave on the defensive side of the ball.”
Blevins said at the time Lodge contacted him, all scholarships were given out based on needs.
“We had kids coming back and had already filled some outfield spots,” he said. “Based on the need, we asked him to walk on. We told him we would give him a shot. We sat down early and I told him what was on my heart and where he would be used. I felt like it would be on defense and as a replacement spot.
“We told him that was a start and if he was willing to do that, we would give it a go. He told me ‘yes sir’ and he was willing to give it a try. From the first day he got here in August up until when we finished this year, I know and he knows, that he will give us all the effort. The role he was put in this year was a tough role for any college athlete. He had to buy his time in order to get his shot. We have been on the same page since the day he has walked in here.”
Blevins said Lodge has done good things on and off the field.
“He was a 3.0 GPA student for us in the fall,” Blevins. “He was instrumental in doing things the right way. He stayed out of trouble and was respectful to other teachers. He had all the intangibles we look for. He kept working and kept getting better and at the end of the year when some guys that were originally better than him slacked off, he got his shot and made the most of it.”
Blevins said based on Lodge’s work ethic, attitude and desire to play, and to be good, he deserves the scholarship.
“I didn’t give it to him. He earned it,” Blevins said. “So, my hat is off to him for being that type person. Others are not willing to work like he has. Scholarships are not just given out. This is the poster child of the effort we want, it is Caden.
“We are very glad to have him. He is getting better every day. He will be in the mix when we start in August. I think he knows he is going to fight for it.
“He will push some guys and have some push him. It is about the competition every day and he is will to go for it every day.”
Now a scholarship athlete, Lodge said he hopes he can come in during the fall and earn a starting position.
“That is what I am here for,” Lodge said. “I am here to play.”