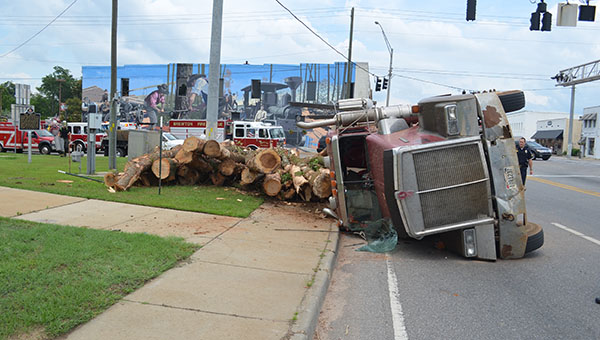 A series of accidents at Brewton’s main intersection of U.S. Hwy. 31 and 41 have residents asking, “When is enough, enough?”
On Monday evening, a train versus passenger vehicle snarled traffic after 5 p.m. Last week, a log truck spilled its haul as it made the turn onto U.S. Hwy. 31 from East Brewton. That accident backed up traffic more than two hours as emergency crews cleaned the roadway.
For years, residents – and city officials – have asked how the downtown area traffic issue could be corrected. Then, and now, prove there is no good answer, Brewton Mayor Yank Lovelace said Tuesday.
“The problem is those are federal highways,” Lovelace said of the intersection. “The railroad is owned by CSX, and because of both of those reasons, there isn’t anything the city can do – except be vocal about the problem.
“Because, there is a problem,” he said. “It’s a major problem, and we continue to work through it. But, we have to work with the federal government, and they’re not responding.
“Maybe the more voices that they hear, maybe we can get someone’s attention,” he said.
Motorists are fortunate to have an alternate route in the event of an accident at the intersection. Generally, when traffic is blocked for the traditional route to East Brewton, motorists can detour around the Grede property, Lovelace said.
As for the reason by the recent rash of accidents, no one knows the answer.
“Every opportunity (city officials had) over the years, we’ve met with federal officials, the state transportation department, and they all tell us that on that turn, they’ve done all they can do,” Lovelace said. “They’ve looked at every option, and the way it’s configured now is the best option.
“But I think something needs to change,” he said. “What that option is, I don’t know.”
Lovelace said there were discussions in the early 2000s about a possible downtown by-pass, but that’s not an option that Lovelace wants to pursue.
“First, then it was in the neighborhood of $200 million to do the project,” he said. “No one has that kind of money. And two, if we did do a bypass, Brewton would not pick up any retail property. It would kill the town and we’d pick up nothing in return. A bypass doesn’t make economic sense.
“All I can say is we’re exploring options, but there’s not a good solution,” he said.

‘Peeping Tom’ gets life in prison