Ready for my close-up: Brewton turns out for movie auditions 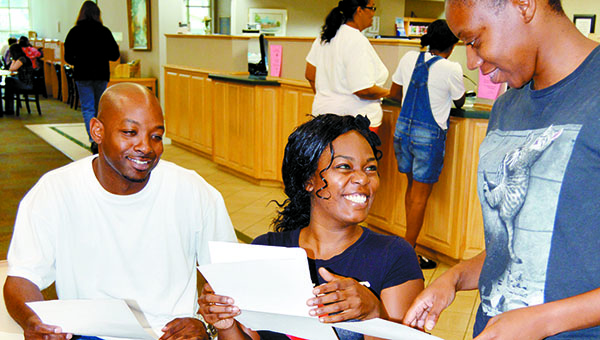 Laqueisha Travis, Willie Samuel and Rayon Jones, all of Brewton, were among the 60 actors who auditioned Saturday.

Brewton has talent, said Bea Woolen, the creative force behind the short film “Aborted Traffic” after Saturday’s auditions.
Woolen, who announced the film last month, hosted an audition session at the Brewton Public Library. Some 60 people read for roles in Woolen’s 45-minute, soon-to-be-filmed, production.
Actors ranged were all of ages and from a number of surrounding locations – the majority, however, were high schoolers. Among those were a group from Brewton and East Brewton.
“I want to do this for the rest of my life,” Brooke Taylor, a tenth grader, said. “I love it. I want to be an actor.”
Kaitlin Stuckey said the experience would be “fun.”
“I’ve been school plays before, but this is the first time I’ve tried something like this,” Stuckey said of the auditions.
Sarah Hammac said she sees acting as a “unique skill.”
“I thought this would be a good learning experience,” Hammac said. “I heard about, and said to myself, ‘Why not?’”
Woolen said she will spend the next week watching submissions and videos. Chosen cast members will be notified via email by Saturday.
“We had a great time in Brewton,” she said. “We, the crew and everyone, are thankful for all the help and the interest in the film.”
Those chosen for parts – which at last count totaled 15 principals and supporting actor roles – will be filmed over a period of three weekends beginning next month. A pubic screening of the final production is tentative set for October, Woolen said previously.