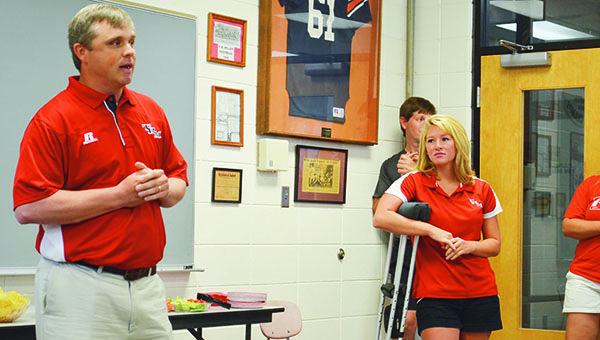 T.R. Miller faithful of all ages came out in the dozens Monday evening to meet the new coaches recently approved and hired for the upcoming seasons at TRM.
Kevin Madden and Terri Lynne Peacock were recently hired to take over vacant head coaching positions at the school.
Madden, a 1993 graduate of TRM, was hired to be the head coach for the TRM baseball. Madden takes over for Jim Hart, who retired at the end of the season. Madden will also be the head coach of the Brewton Middle School football team.
Peacock, a 2006 graduate of TRM, was hired to be the head coach of the TRM volleyball and softball teams. Greg White held those positions as of recent before stepping down at seasons end.
Peacock: 27, comes to TRM from Flomaton where she has spent the last two years coaching. Peacock also has coached at Daleville.
Peacock said she is very excited about being back at TRM.
“I am excited and grateful to come back and be part of a program that did so much for me,” she said. “I am just excited to pay it forward and give to the kids something that I was able to part of. I am just excited.”
Peacock said as head coach at two sports at TRM, she wants to teach her athletes the things she learned as a player during her days at TRM.
“My coaching philosophy is just basically what I learned here and that is to work hard and give 110 percent and do work in the weight room,” she said. “I believe in the weight room is where you get tough. I just want the kids to work together and be a team and take on their role and be a good teammate.”
Peacock said she has already met with her teams and has started summer workouts.
“We had our first two weightlifting sessions last week and they were really receptive,” she said. “I am really excited about this bunch of girls. I don’t think I could have gotten a better set. We did some things that were different that they had not done before, but they were all about it. They had a good attitude and were ready to get to work. I will pick up some new traditions that were not set when I was here and I will learn about them. Then I will bring some things I have learned in my three years of coaching.”
“I am just super excited. I can’t imagine a better place to be. I enjoyed my previous coaching stints. It is just something about being able to come home. This is where I laid it all out. It is just nice to come back and be on this side of things. I am just really excited.”
Madden, 39, comes to TRM from Fairhope.
“I have coached at Mary G. Montgomery for eight years, Hoover for three, Foley for two, one year at Enterprise and the last five at Fairhope,” he said. “We are excited to be back in Brewton. This is kind of like our dream job. I have been coaching 18 years and this is where I have always wanted to end up at. It is answered prayer and a dream come true.”
As far as coaching at TRM, Madden agreed with Peacock in instilling the concepts he learned at TRM to his new team.
“I just want to bring the same things that I learned here,” he said. “I learned that you work hard, do things the right way and have pride in what you do. The foundation that I have always had is what was taught to me at TRM.”
Madden and his players began summer workouts Tuesday and he is excited about the team and the new facilities being built at the baseball complex at TRM.
“I have met with the players,” Madden said. “We have started summer workouts. We are excited about the new facilities. It is a unique situation. You usually don’t come into something new, you usually have to build those things. It will be nice that it will already be done. We are excited about the new facilities.
“We are just excited to be here. We can’t wait to get started and to be part of a program with the rich and high tradition that TRM has.”
Mikel Riggs, who was on staff at TRM last year, but taught at a different school, has also recently been hired in the Brewton City Schools system.
Riggs will teach PE at BES and will also serve as the head tennis coach along with assistant football duties.