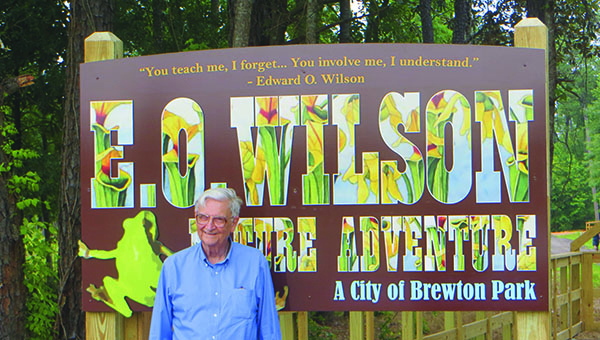 Proud moment. That’s how the world-renowned biologist and two-time, Pulitzer-prize winning novelist E.O. Wilson described the dedication for the park that bears his name.
Sunday, Wilson traveled back to the Burnt Corn Creek swamps where he learned to love biodiversity and watched as scores of others celebrated the new park with him.
Mayor Yank Lovelace described the 100-acre park as a “living classroom” that will be equipped with an outdoor classroom, zip line, primitive camping and other adventures. He thanked the Miller and Weaver families for the property donation that made the park possible.
Wilson, a professor emeritus at Harvard University, spent summers in Brewton as a teenager working at a gold fish hatchery that once operated near where the city’s fire station now stands. On Sunday, he recalled his short stint on the T.R. Miller football team in 1944 before directing the crowd back to the city’s accomplishment.
“I am so proud the city has chosen to maintain the connection to nature,” Wilson said. “You have a vision here, and I can see that from its inception, it will be a beacon for the future.”
Wilson graduated from the University of Alabama and went on to Harvard and is now considered the world’s leading expert in myrmecology, the study of ants. He is described in many scientific journals as “the father of sociobiology” and has worked extensively developing theories like biophilia, the human need and love for nature. His work has been recognized as the foundation for conservation area design. Wilson discovered the first documented colony of fire ants in North America as he explored near Mobile as a teenager.
He said it was on the banks of Brewton’s Murder Creek where he learned to love the outdoors and spoke of his snake collection.
“We lived on Brooks Street, where I had a zoo of sorts,” he said. “I loved snakes. I would catch them and keep them. This one time I caught the biggest water moccasin I had ever seen.
“Now, kids, you don’t go and do that,” he warned. “I don’t know how he didn’t bite me, but I made it.
“When I look at (the park), I see a place where you have incorporated as much of the natural world as you can,” he said. “This opens the door to young people who, like me, can have a place where one can excite the mind and encourage them to become a scientist.
“To have this park named after me is the greatest honor,” he said. “And I thank you.”
On hand for the day’s event were also members of the Auburn University’s raptor display and Jimmy and Sierra Stiles, area biologists.