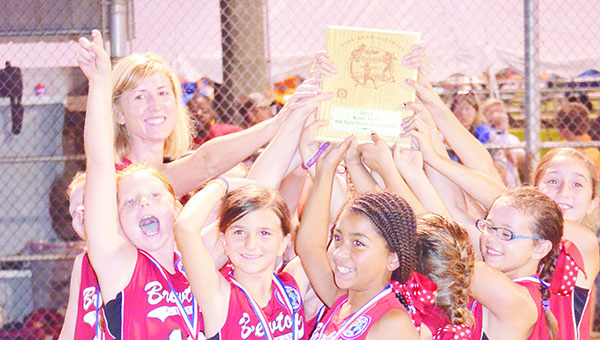 Brewton’s 8U all-star softball team captured the South sub-state championship Saturday night in Brewton as they downed East Brewton 15-5 in five innings. East Brewton earned the South sub-state runner-up trophy.
In the game Saturday, Brewton led East Brewton 1-0 after one inning and 2-0 after the second inning.
In the third inning, East Brewton plated five runs to take a 5-2 lead, but Brewton rallied with four in the bottom half of the inning to take a 6-5 lead into the fourth.
After holding EB scoreless in the top of the fourth inning, Brewton plated nine runs in the bottom of the inning to get the win by the 10-run mercy rule to claim the championship.
Brewton opened tournament play with a 6-2 win over NW Escambia and then defeated Covington County 15-5.
Against NWE, Brewton’s Hayleigh Gideons had a hit and one RBI and Bentley Edwards had two hits. Kinsley Byrd added one hit and Rebekah Rowell had two hits and two RBIs. Ellie McMillan added two hits and Amberlyn Carnley had three RBIs.
DeNiya Lambert, Paige Young, Claire Smith and Edie Walker all had one hit each.
Byrd, Rowell, Walker and McMillan all had one double each.
Against CC, Edwards had three hits and Smith had four hits and five RBIs. Byrd added three hits and three RBIs while Rowell had two hits and two RBIs.
McMillan added two this and one RBI along with Carnley while Lambert had one hit and one RBI.
Gideons added one hit, Young had two hits and one RBI and Allison Reeves had one hit. Byrd, Walker, McMillan and Lambert had a double each.
In the championship win over EB, Edwards had two hits and one RBI while Smith had four hits and one RBI. Byrd added two hits and one RBI while Rowell had three hits and three RBIs. McMillan also had three hits and had four RBIs while Allison Morgan finished with two hits. Lambert added three this and two RBIs, Walker had one hit and one RBI, while Paige Young had one hit. Reeves had two hits and two RBIs and Gideons had two hits.
McMillan had two doubles while Lambert had one. Rowell added a triple.
EB went 2-2 in the tournament, but fought their way out of the loser’s bracket to play in the championship game. The Lady Eagles opened the tournament with a 19-18 loss to Covington County, but then went on to defeat NWE 5-4 and CC 6-5 to meet up with Brewton in the championship game.
In game one, for EB against CC, Madison Dawkins had an inside-the-park three-RBI homerun. Dawkins had three hits and Courtney Campbell added three hits along with Karrie Cutts, Dashya Montgomery, Maddie Mealer and Tori Barksdale. Kadence Wood added two hits.
Against NWE, Barksdale had an inside-the-park homerun. Barksdale had two hits along with Viskya Lantzsch. Dawkins had one hit along with Campbell, Montgomery, Aliya Holder and Hannah Moore.
Against CC in game two, EB built a 5-0 and held on for the 6-5 win. Dawkins had three hits while Montgomery, Holder, Lantzsch and Barksdale had two hits each.
Against Brewton, Lantzsch, Mealer, and Barksdale had two hits each while Dawkins, Campbell, Kutts, Montgomery, Moore and Demiyah Floyd all had one each. 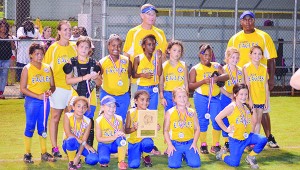