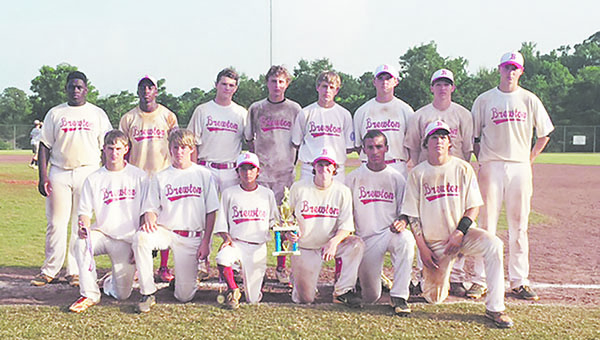 The Brewton Babe Ruth 15U all-star team finished as the state runner-up Tuesday in Opp after they fell to Monroe County 9-2.
Brewton had previously went 2-1 against Monroe County in the district tournament in Poarch.
Overall in the state tournament, Brewton went 4-2.
The team opened with a 7-4 win over Mims Park before falling to Wetumpka 4-3.
Brewton then took down Opp 15-2 and Tallassee 10-4.
In the semifinals, Brewton defeated Sylacauga 11-9, before falling to Monroe County in the championship game by seven runs.

Saturday game one: Brewton 7, Mims Park 4
With the game tied 2-all after three innings, Brewton scored five runs in the fourth inning to get a 7-4 win over Mims Park in their first game of the tournament.
At the plate for Brewton, Matt Hutchins and Jason Konsler led the way. Hutchins went 1-for-4 with a homerun and two RBIs while Konsler went 2-for-3 with a triple and three RBIs.
Hunter Johnson added one RBI while Kristian Taylor went 1-for-2. Westin Riddle had one RBI and Jacobey Hawthorne went 2-for-3.
On the mound, Taylor, Riddle, Drew Williamson and Stokes Jennings all pitched with Riddle earning the win.
The quartet of pitchers combined to go seven innings and allowed six hits, four runs, three earned, walked four and struck out four.

Sunday game two: Wetumpka 4, Brewton 3
Despite having seven errors in the game, Wetumpka edged out Brewton 4-3 on Sunday to drop Brewton to 1-1 in tournament play.
The game was tied at 2-2 after four innings and 3-3 after six innings before Wetumpka plated one run in the bottom of the seventh to defeat Brewton.
At the plate for Brewton, Micah Flores had one hit and Hutchins added a double. Hawthorne, Konsler and Revel all had one hit each. Konsler had two RBIs while Revel had a double.
On the mound, Jennings, Williamson, and Hutchins all pitched with Jennings taking the loss.
The trio went a combined 6 2/3 innings and allowed 11 hits, four runs, three earned, walked one, struck out six and hit three batters.

Monday game three: Brewton 15, Opp 2
Brewton scored six runs in the first inning and nine in the second to get a 13-run win over Opp Monday morning by a score of 15-2.
Opp scored one run each in the first and second inning, but made seven errors in the loss and had only three hits.
For Brewton at the plate, Hawthorne, Taylor, Hutchins, Williamson, Revel, Russell Smith, and Flores all had one hit each while Jennings had two.
Williamson and Smith had a double each.
Taylor and Revel had one RBI each while Hutchins and Jennings had two RBIs. Smith led with four RBIs.
Taylor, Riddle and Jeremy Gafford all pitched in the win with Taylor being the pitcher of record.
The trio combined to go five innings and allowed three hits, two runs, one earned, walked two and struck out three.

Monday game four: Brewton 10, Tallassee 4
In their second game Monday, Brewton held Tallassee to four runs on three hits to get a 10-4 win. Tallassee made six errors in the loss.
After a 2-all score after one inning, Brewton built a 9-2 lead after the top of the sixth to propel them to the win by six runs.
At the plate for Brewton, Jacobey Hawthorne went 3-for-5 with one RBI and Kristian Taylor went 2-for-5 with one RBI and a double. Jason Konsler followed with a 1-for-2 day and one RBI while Drew Williamson was 1-for-3 with a double and two RBIs.
Russell Smith and Stokes Jennings both added one hit each while Riddle had one RBI and Jennings had two.
On the mound for Brewton, Hawthorne, Riddle and Jennings all pitched with Hawthorne getting credit for the win.
The trio combined to go seven innings and allowed three hits, four runs, one earned, walked seven and struck out nine.

Tuesday game five: Brewton 11, Sylacauga 9
Brewton built and 11-3 lead over Sylacauga and held on for an 11-9 win to advance to the state championship game.
Leading 2-0 after one inning and 3-2 after two innings, Brewton built a 9-3 lead after five innings and an 11-3 lead after the top of the sixth inning.
Sylacauga made things interesting in the bottom of the inning as they scored six runs to cut the lead to 11-9. Neither team scored in the seventh inning as Brewton held on for the two-run win.
At the plate, Kristian Taylor, Matt Hutchins and Russell Smith all had three hits each. Jason Konsler added a double and Williamson added a hit. Hunter Revel led with a homerun and four RBIs while Micah Flores and Jennings had one hit each.
Jennings had one RBI along with Hawthorne while Williams had three RBIs.
On the mound, Smith and Williamson combined for the win with Smith being the pitcher of record.
The two combined to go seven innings and allowed 11 hits, nine runs, five earned, walked five, struck out three and hit one batter.

Championship game Tuesday: Monroe County 9, Brewton 2
In the championship game against Monroe County, Brewton scored two runs on five hits and made four crucial errors to suffer a 9-2 loss for the state runner-up.
Neither team scored in the first inning and Monroe led 3-0 after two innings. After Brewton cut the lead to 3-2 in the top of the third, Monroe County scored six unanswered runs, including four in the fifth to put the game away
Konsler, Williamson, Smith, Flores and Jennings all had one hit each in the loss. Jennings had a double and Konsler had one RBI.
On the mound, Smith, Williamson, Riddle, Taylor and Jennings pitched with Williamson being the pitcher of record.
The five pitchers combined to go six innings and allowed 10 hits, five earned runs, walked two, hit three and struck out three.