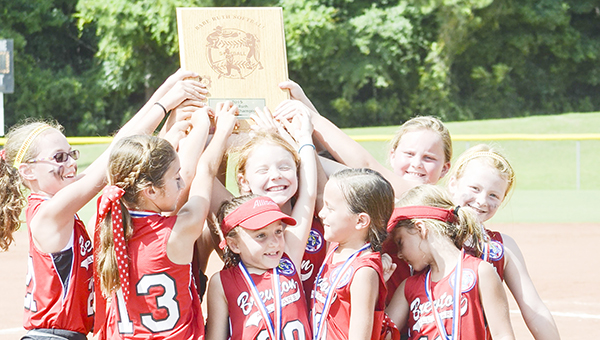 Brewton’s 8U softball all-stars clinched the state championship Saturday in Brewton as they finished off a sweep of East Brewton.
In game one Friday, Brewton won 15-5 in the best two-of-three series. On Saturday, Brewton took home the championship with a 19-11 win.
Head coach Dylan Byrd said he was very proud of his 8U team.
“We fought through a month of practice and a month of playing,” Byrd said. “Every one of the girls did their part. It was a team effort one play at a time. I am just proud.”
East Brewton came out and we played the best two-out-of-three, he said.
“It was big time for them to come up and do that. They are a very good team. It is tough for them to have to go out like this, but I am glad that we won.”

GAME ONE: BREWTON 15,
EAST BREWTON 5
Trailing 1-0 after the top of the second inning, Brewton scored 10 runs over the next three innings to propel them to a 15-5 win over EB.
Brewton scored three runs each in the second and third innings and four more in the fourth to build a 10-1 lead. After EB cut the lead to 10-5 in the top of the fifth, Brewton scored five runs in the bottom of the inning to get the win by 10.
For Brewton at the plate, Bentley Edwards had two hits while Claire Smith and Kinsley Byrd had four hits each. Rebekah Rowell, Daniya Lambert and Hayleigh Gideons all had two each while Allison Reeves had three. Ellie McMillan, Amberlyn Carnley, Allison Morgan, Edie Walker and Paige Young all had one each.
Smith had a double while Reeves and Rowell both had one homerun each.
For EB, Madison Dawkins led with three hits while Karrie Cutts and Kadence Wood had two each. Courtney Campbell, Dashya Montgomery, Aliya Holder, Hannah Moore and Tori Barksdale all had one each.
Dawkins and Barksdale had a double each while Montgomery had a triple and Holder had a homerun.

GAME TWO: BREWTON 19,
EAST BREWTON 11
Needing one win for a state championship Saturday, Brewton used a nine-run fourth inning to give them the championship win by a score of 19-11.
The game was tied 3-3 after one inning before Brewton took a 7-3 lead after two innings. After EB cut the lead to 7-4, Brewton’s nine-run fourth inning gave them a 16-4 lead.
From there, EB scored three runs in the fourth and four more in the fifth to cut Brewton’s lead to 16-11 heading into the sixth inning. In the sixth, Brewton put the game away with three runs to get the eight-run win.
For Brewton at the plate in the win, Byrd and Rowell led with four hits each while Smith, Edwards, McMillan, Lambert, Young and Reeves all had three hits each. Morgan, Gideons, and Walker had two hits each while Carnley had one.
Reeves, Byrd and Walker all had a double each while Edwards, Smith and Carnley all had triples. Byrd added a homerun in the win.
For EB, Dawkins led with five hits while Campbell had one, Cutts and Montgomery had four each, Lantsch and Holder had two each, Moore had three and Wood and Mealer had one each. 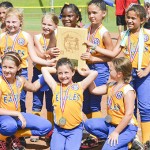 EB 12U finishes second at state