History arrives at our backdoor 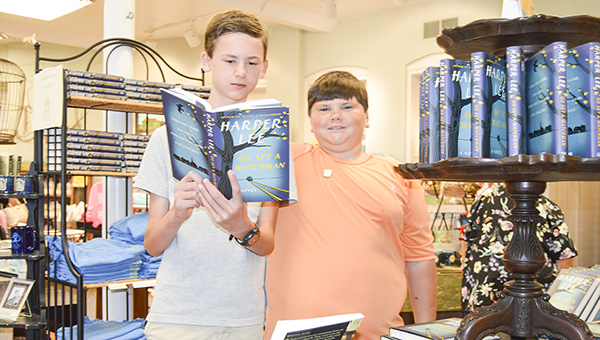 For months, the world’s eyes have been trained on Monroeville as news of Harper Lee’s new book “Go Set a Watchman” broke.
The 40 miles between Brewton and the “literary capital of Alabama” was nothing to the scores of visitors filling the streets Tuesday.
Some 400 people attended the midnight launch party for the book at Ol’ Curiosities & Book Shoppe, said Dawn Brewton, Monroeville’s events coordinator.
“It was fabulous,” Brewton said. “There was even a grand popping of champagne to celebrate.
“Over these last few months, the amount of people from all over the world here in Monroeville has been amazing,” she said. “And the tags (Tuesday) – Connecticut, Massachusetts, Tennessee, Indiana, and a lot of Alabama ones. I’ve been really impressed at the number of people.”
Among those were a number of Brewton residents, with one or two enjoying a big of fame themselves for making the trip.
Carrie Johnson, Jefferson Davis Community College art teacher, was interviewed by the New York Times. Her “Alabama Shakes” T-shirt was the perfect icebreaker, she said.
“That was pretty amazing,” Johnson said of the experience. “All of this excitement over ‘To Kill A Mockingbird,’ and now ‘Go Set A Watchman;’ to know that it was written by a woman who lived right down the road. That’s history.”
Sam William of Monroeville nodded his head in agreement as Johnson shared.
“It’s been like the United Nations down here,” William said. “I was quoted in the Smithsonian (magazine) one week, and the next, Katie Couric was grabbing me. Amazing, I say.”